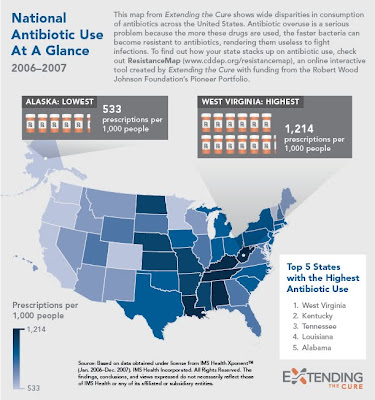 The next time you ask your doctor for an antibiotic, or if he or she offers to give you one, think again. It might do your health no good, but could be bad for public health.

"Every time an antibiotic is used ... future effectiveness of that drug is diminished," but Kentuckians take antibiotics at the second highest rate in the country, with 1,205 prescriptions per 1,000 people, says a study by the Centers for Disease Dynamics, Economics and Policy. Only West Virginia had a higher rate, 1,214 per 1,000.

Studies show 1 million antibiotics are prescribed unnecessarily every year. "Though antibiotics offer no benefits for colds and other viral infections, many people, including doctors, continue to view these drugs as a quick fix," said a press release by the Robert Wood Johnson Foundation, which helped fund the study.
The problem with the overuse of antibiotics is that bacterial infections become resistant to them. To illustrate the issue, CDDEP says, "High-level penicillin resistance in Streptococcus pneumonia in the United States has experienced a thousand-fold increase in the last 20 years," rising from 0.02 percent in 1987 to more than 20 percent in 2004. The prevalence of methicillin-resistant Staphylococcus aureus — known more commonly as staph — increased from about 2 percent in 1974 to 50 percent in many U.S. hospitals in 2004.
"The problem of resistance is an evolutionary game played between humans and microbes: we try to stay ahead by creating new antibiotics, and microbes develop resistance to our drugs," CDDEP reports. "Unfortunately for us, microbes evolve resistance to antibiotics faster than we can create new drugs, meaning that, in recent years, bacteria have been winning this 'arms race.'"
Though there is no cure to resistance, managing the levels at which people become resistant is possible through judicious prescribing, vaccination, hospital infection control, treatment strategies and new antibiotics. (Read more)
Posted by Tara Kaprowy at 12:00 AM