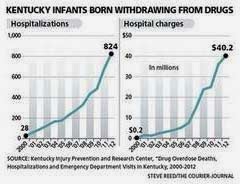 "The state has seen hospitalizations for drug-dependent newborns soar nearly 30 fold in a little more than a decade — from 28 in 2000 to 824 in 2012, according to a recent drug report from the Kentucky Injury Prevention and Research Center. Preliminary figures suggest that number will surpass 900 in 2013, according to state officials," Ungar reports, in a follow-up to a series she did on the state's prescription-drug abuse problems in 2012.

"The financial cost is also high — and climbing exponentially," Ungar writes. "Hospital charges for drug-dependent babies in Kentucky rose from $200,000 in 2000 to $40.2 million in 2012, with $34.9 million that year paid for by government Medicaid," nearly 30 percent of which comes from Kentucky taxpayers.

"Although there are no state-by-state statistics, Dr. Henrietta Bada, a neonatal-perinatal medicine doctor at the University of Kentucky, said she believes Kentucky has one of the nation’s worst problems with drug-dependent babies." the Journal of the American Medical Association reported that U.S. hospitalizations for drug-dependent babies rose 330 percent from 2000 to 2009; "Kentucky’s hospitalizations rose more than 1,400 percent during that same time," but the state has "only 55 treatment centers serving pregnant and postpartum women, the vast majority outpatient facilities," Ungar reports. That's “a fraction of what we need,” Attorney General Jack Conway told her.
Posted by Al Cross at 11:50 PM