Health-board smoking bans that Supreme Court struck down are still being obeyed: 'Everybody loves it,' advocate says


Three counties in Kentucky with unenforceable smoking bans continue to be smoke-free by the people’s choice.

Clark, Madison and Woodford counties have smoking bans that can’t be enforced because they are regulations of county health boards, which the Kentucky Supreme Court ruled in June do not have the power to ban smoking in public places. But officials in each county reported that most of the establishments in these counties continue to be smoke-free by choice.

“We are finding, in general, public spaces and restaurants are still complying with regulations as if it is still enforceable,” said Christie Green, public-information officer for the Madison County Health Department. “It seems as if the general public prefers this.”

In Versailles, the city council “hadn’t heard from one single tax-payer who is opposed to it,” recently resigned city council member Sonny Jones said in an interview before his resignation.

Scott Lockard, director of public health in Clark County, said likewise. “The community has remained smoke free. The public has demanded this, ” he said, and as far as he was aware “No businesses have gone backward in this.”

That doesn’t surprise Ellen Hahn, director for the Kentucky Center for Smoke-Free Policy and the state’s leading smoking-ban advocate. “When communities go smoke free, everybody loves it,” she said.

The anti-smoking regulations can’t be enforced, advocates said. “If enforced, a lawsuit might result,” Lockard said. “We have no active enforcement right now in Clark County.” 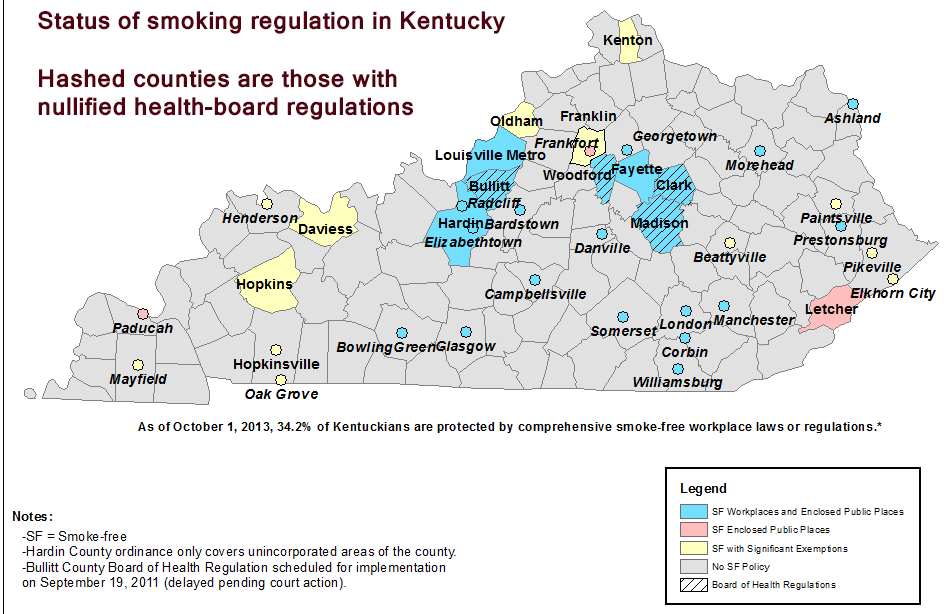 The court ruled in a case from Bullitt County, where a local judge had blocked enforcement.

Each of the other counties is handling the issue somewhat differently.

Woodford County, out of “respect for the cities” of Midway and Versailles, will let them determine whether they want to reinstate their previously enacted smoking bans before the county fiscal court makes a decision for the unincorporated area of the county, County Attorney Alan George said, “because the bulk of the affected business is in the city.”

Midway passed a new anti-smoking ordinance Aug. 18 and Versailles plans to hold its first reading on one Sept. 2.

Madison County plans second reading and passage of its smoking ordinance for Sept. 9. Berea is scheduled to do likewise Sept. 2.

Clark County has “no forward actions” or “no ordinance drafted” at this time, Lockard said. Asked if officials are waiting on the Nov. 4 election to move forward, he said that “no one had come out and said the election will play a role,” but he noted that the Winchester mayor and the county judge-executive have opponents.

The Supreme Court ruling was a great disappointment to smoke-free advocates. Betsy Janes, coordinator for Smoke Free Kentucky, said several health boards had been ready to implement smoke-free regulations, but were waiting on the Supreme Court. These plans obviously have had to change.

“It was a major blow, but the good thing is that it is very clear who has the authority to do this now,” Janes said. “Fifty-five percent of Kentuckians want to be smoke free. We are losing 1000 Kentuckians a year to second hand smoke,” based on research that has determined its effects.

While Hahn said the decision was a “step backwards for Kentucky,” she also said her center is “busier than ever” working with fiscal courts to create smoke-free laws on the local level. She said there are 35 city or county ordinances in effect, covering 31 percent of Kentuckians.

The Kentucky Chamber of Commerce supports statewide smoking ban, which has never come to a vote in either chamber of the legislature.

“Twenty-four other states have statewide smoke-free laws and we want to not be the last to join them,” said Ashli Watts, the chamber’s public-affairs manager.

While Clark County is not pursuing a smoke-free ordinance now, the health department is actively educating the public about the benefits of such laws and plans to be a strong advocate to get something passed, Lockard said.

“We are finding overwhelming positive response to smoke-free,” he said. “The Board of Health and health department will work in any way possible to get a law on the books.”

Lockard also voiced his hope that school boards will pass smoke-free policies in schools, which he said should be attainable because no legislation is needed.

“There are 174 school districts in Kentucky and less than 40 of them have smoke-free policies on their campuses,” Lockard said. “If we could have all schools smoke-free, that would have a major impact on our communities.”


Lockard reflected on what Tom Frieden, director of the federal Centers for Disease Control and Prevention, said in his recent visit to Kentucky, that the most important changes Kentuckians need to make to improve their health are to stop smoking, decrease secondhand smoke exposure, and to exercise.
Posted by Melissa Patrick at 9:19 PM