Fewer Kentuckians are worried about losing health insurance, though fewer say they are on employer-sponsored plans

Nearly one in four Kentucky adults with health insurance worry that they could lose their health coverage -- less than last year, when almost one in five said they were concerned, according to the latest Kentucky Health Issues Poll.

The survey, taken by telephone Oct. 24 to Dec. 2, found that the share of Kentuckians with public insurance (such as Medicaid, Medicare or veterans' benefits) in 2017 moved back up to its 2015 rate of 35 percent. It had dropped to 29 percent in 2016. 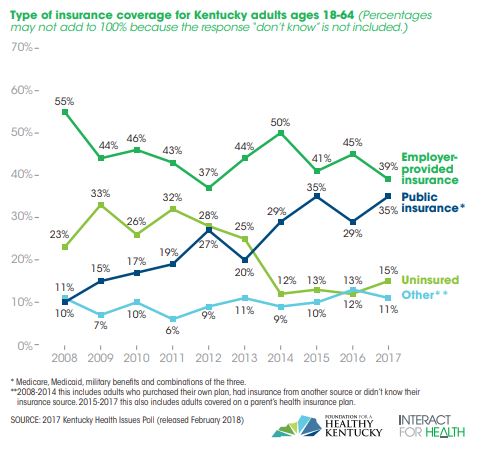 The share of Kentuckians with employer-provided insurance dropped to 39 percent, continuing a bumpy decline that began in 2014, when the rate was 50 percent. About 11 percent of Kentucky adults reported they bought health insurance on their own or through a parental plan.

The decline in employer-sponsored insurance could be significant, because part of Gov. Matt Bevin's strategy in adding work rules to Medicaid is to encourage those on the program to find jobs that offer insurance. Most of those who will be affected by the work rules already work, but many at low-paying jobs that don't offer insurance.

In 2014, when then-Gov. Steve Beshear expanded Medicaid to those who earn up to 138 percent of the federal poverty level, the share of Kentuckians without health insurance dropped from 25 percent to 12 percent. The rate rose to 15 percent in the latest poll, after two years at 13 percent, but those numbers were within the poll's error margin of plus or minus 2.4 percentage points.

The survey also found that an additional 6 percent of Kentucky adults who had health insurance at the time they were polled were without it at some time during the prior 12 months.

"Health insurance and good health go hand in hand," said Ben Chandler, president and CEO of the Foundation for a Healthy Kentucky, which co-sponsors the poll with Interact for Health, a Cincinnati foundation. "Preventive care and wellness checks are as necessary as treatment for chronic illness, and too many Kentucky adults are still going without the care they need due to lack of insurance."
Posted by Melissa Patrick at 9:54 PM