Health secretary says some benefits will likely be cut if Medicaid changes are ruled illegal; three counties to start a month early

Kentucky's new Medicaid plan is set to kick in July 1, but the state's top health official said some of the program's benefits could be cut if a federal judge in Washington rules against the changes.

The new program, called Kentucky HEALTH, for Helping to Engage and Achieve Long Term Health, includes, among other things, work or other community engagement requirements; monthly reporting; lock-out periods for failure to comply; and premiums and co-payments based on income.

Sixteen Kentucky Medicaid members are suing the federal government, arguing that it lacked the authority to let Kentucky require Medicaid beneficiaries to work, volunteer, attend job training or go to school in order to keep their health coverage. U.S. District Judge James Boasberg has said he would rule by Saturday, June 30; the changes are due to start in Campbell County on July 1.

Adam Meier, secretary of the Cabinet for Health and Family Services, told legislators at the June 20 joint health committee meeting that if Boasberg rules against the changes, the state would likely have to cut dental, vision and possibly prescription-drug coverage for some people.

Kentucky HEALTH had already shifted the dental and vision benefits from being free to a "My Rewards" program that requires most adult Medicaid recipients to participate in certain activities to get dental and vision care.

Meier added that an adverse ruling would also force the state to consider rolling back the expansion of the Medicaid program to nearly 500,000 Kentuckians. In all, Medicaid covers nearly 1.4 million Kentuckians, or nearly one in three.

Gov. Matt Bevin has said Kentucky will end the expansion of Medicaid if a court blocks the changes, and has issued an executive order putting the termination into effect within six months of the final appeal.

“Kentucky HEALTH is our way of maintaining expansion, maintaining coverage and maintaining access,” said Meier. “Without having the waiver approved, we lose our ability to do that effectively.”

The state has estimated that 95,000 fewer Kentuckians will be enrolled in Medicaid in five years with the changes than without them, partly because of noncompliance, and that the new plan will save an estimated $2.4 billion over the next five years: about $300 million in state money and the rest federal.

Meier added that any disruption to the roll-out of the new Medicaid program would also add significant technology costs to the state and would create communication challenges and confusion among the affected recipients.

In a separate meeting on the same day, Meier told the legislative Medicaid Oversight Committee that the state projects spending of about $300 million in excess of appropriations over the next biennium.

And though he said the state expects to save money by implementing Kentucky HEALTH, he couldn't say how much.

He added that the state expects to spend more than $300 million over the next two years to upgrade its computer systems, most of it federal money, but he couldn't say how much the state would spend on administrative costs. He said the state has spent less than $10 million of on the project so far. 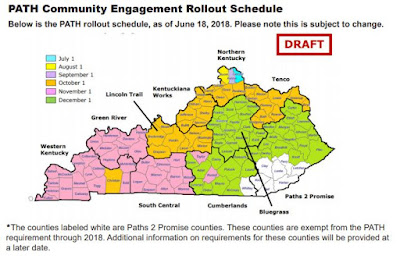 The most controversial part of the new plan has been the 80-hour-per-month "community engagement" requirements that are to be in place in all but eight counties by Dec. 1.

The Kentucky HEALTH website says activities that count toward the "Partnering to Advance Training and Health" or PATH Community Engagement requirements, include: working, looking for a job, training for a new job or skill, attending classes, volunteering, caretaking, and participating in treatment for substance use disorder .

Kristi Putnam, deputy secretary of the health cabinet, said three counties have asked to begin their community engagement requirements one month before other counties in their respective regions.

Christian County is now scheduled to start Oct. 1, with the rest of the Western Kentucky region to start Nov. 1; and Taylor and Russell counties will start Nov. 1, with the rest of the Cumberlands region (except Whitley County) to start Dec. 1. Seven other counties in southeastern Kentucky will be delayed because they are part of a pilot program to find jobs for food-stamp recipients.

These requirements will largely impact the nearly 500,000 Kentuckians who gained Medicaid coverage through the expansion to people with incomes up to 138 percent of the federal poverty level, which is $16,394 for an individual and $33,534 for a family of four.

For more information on Kentucky HEALTH, go to kentuckyhealth.ky.gov.

A county-by-county spreadsheet of enrollment in Medicaid, as of January 2018 can be downloaded from:http://www.uky.edu/comminfostudies/irjci/MedicaidbycountyJan2018.xlsx.

Posted by Melissa Patrick at 3:57 PM