Kentucky saw an 11.5 percent increase in drug-overdose deaths in 2017, with more than half of the them from fentanyl, a synthetic opioid that can be up to 50 times more potent than heroin. The number of heroin deaths decreased, but overdose deaths from methamphatime surged, according to to the annual Kentucky Office of Drug Control Policy report.

"Fentanyl is the deadliest and most addictive drug our nation has ever seen,” Van Ingram, executive director of the ODCP, said in a news release. “The fact that people continue to use it – despite the obvious risk – shows just how addictive these drugs are. People have become powerless against them. That’s why we have to make every effort to intervene with a comprehensive treatment response.”

Fentanyl has been a leading factor in overdose deaths since 2015 and is often mixed with heroin or put in pills, making it difficult to determine the dosage. Ingram notes that drug cartels in China and Mexico have turned to fentanyl because it is cheap to produce and provides a higher profit margin.

Beth Warren of the Louisville Courier Journal reports that "a dose as small as two milligrams, the size of Abraham Lincoln's cheek on a penny, can be lethal." Carfentanil, a synthetic opioid that is used as an elephant tranquilizer, is even stronger.

Alprazolam is an anti-anxiety medicine that is often known by its brand name Xanax. It was detected in 36 percent of the toxicology reports. Gabapentin, which is sells under the brand names Neurontin, Gralise and Horizant, and is often taken along with other illicit drugs to enhance their effects, was found in 31 percent. Methamphetamine, a stimulant that has long plagued Kentucky, was found in 29 percent, more than double last year's total.

"Autopsies and toxicology reports from coroners show that approximately 22 percent of overdose deaths involved the use of heroin in 2017, down from 34 percent in 2016," the report says.

Other counties' rates were less than the state average of 3.3 per 10,000, or their rates were not published because they had fewer than five overdose deaths last year. The latter group included Leslie, Bell, Powell and Gallatin counties, which led last year's list with rates of 6.6 to 5.6 per 10,000.

The state's two most populous counties, Jefferson and Fayette, had the most overdose deaths in 2017, 426 and 123 respectively. The largest numerical increase in overdose fatalities occurred in Jefferson, which had 62 more than in 2016. Fayette went up by 49, Campbell by 26 and Kenton by 17. The largest decrease was in Madison County, which had nine fewer last year than in 2016. 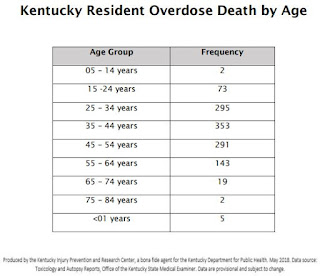 Gov. Matt Bevin said the report “underscores just how much is at stake in the ongoing battle against the nation’s opioid epidemic. This is a fight we must win for the sake of our families, our communities, and the commonwealth as a whole. We will continue to leverage every available resource to close off the funnel of addiction and to help our fellow Kentuckians who are struggling against this scourge.”

Kentucky has launched a number of initiatives to battle the epidemic, including a public awareness campaign called "Don't Let Them Die" that offers information on substance use disorder, treatment and naloxone, a drug that can reverse an overdose.

Kentucky State Police have launched the Angel Initiative, which allows those seeking treatment to visit a KSP post, where they would be directed to treatment.

The General Assembly has passed several laws in recent years, including a crackdown on pain clinics, limiting opioid prescriptions for acute pain to a three-day supply (with exemptions), tougher penalties for heroin dealers, more funding for drug treatment, and paying for increased access to naloxone. The attorney general's office has sued pharmaceutical companies.

Data for the report was compiled from the Kentucky Medical Examiner’s Office, the Kentucky Injury Prevention & Research Center and the state Office of Vital Statistics.
Posted by Melissa Patrick at 6:37 PM