Ambulances report fewer overdose calls, say trend is partly due to availability of drug antidote Narcan and increased use of meth 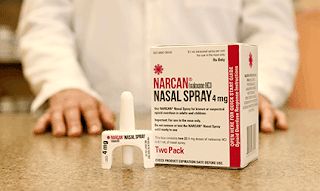 Your local ambulances may be getting fewer calls for drug overdoses, but that doesn't necessarily mean that your local drug problems are decreasing.

The Anderson News found that OD ambulance calls in the Central Kentucky county fell 20 percent from 2017 to 2018, from 95 to 77 -- but the county's emergency director, Bart Powell, "said he and others in emergency management attribute the decline in ambulance calls to the widespread availability of Narcan, the drug used to revive overdose victims," Publisher-Editor Ben Carlson reports. Also, "Addicts are turning to other sources to get high."

“Meth is more common and generally doesn’t lead to overdose. It’s cheaper, too,” Paul Barrick, leader of the local HEROES (Helping Educate, Reaching Out, Ending Stigma) organization, told Carlson, who writes: "Powell agreed that it appears meth is being used in place of heroin, in part because of changes in the law that make obtaining it more expensive and difficult."

Powell said other ambulance services in Kentucky have seen similar declines in OD calls and attribute them to the availability of Narcan, the commonly used brand of the drug naloxone, which counteracts opiates and opioids.

"Narcan, which previously was administered only by medical care providers, has in recent years been made available to police officers and the general public," Carlson notes. "As a result, those who overdose on opioids can be revived by family members, friends or responding police officers if they arrive ahead of an ambulance."

Powell said, “The introduction and availability of Narcan to the general public has resulted in a slight reduction on our runs because they are self-treated at the scene,” Powell said. “That’s backed up by other EMS providers in the state.”


Barrick, "who for years has helped raise awareness of opioid addiction and education, said there are some encouraging signs. “Families are much more educated regarding treatment options,” he said. “The stigma regarding addiction has changed, and schools and churches are also more willing to help with support and education.”
Posted by Al Cross at 8:57 PM