Flu numbers jumped 65% in first week of year; about half of cases are children; several months left in flu season, so get your shot

The number of influenza cases confirmed in Kentucky rose by 65 percent in the first week of 2019, adding nearly 1,000 cases for a total of 2,408 in the current flu season, according to the latest weekly surveillance report from the state Department for Public Health.

The department reported the first flu outbreak in a long-term-care facility, and for the first time reported cases in all 17 of the state's health regions. It said all but one of those regions (which it didn't specify) reported increased flu activity. 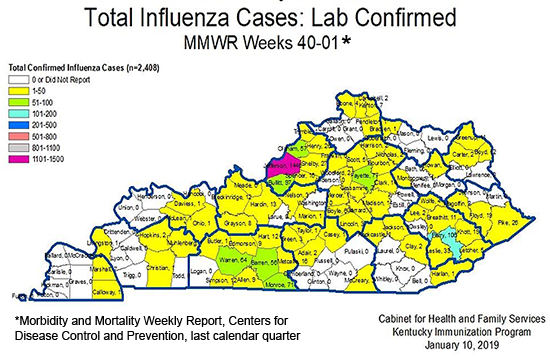 On the department's county-by-county map, the relatively small county of Monroe and the less-than-average sized county of Perry stood out. The state has confirmed 106 cases in Perry and 71 in Monroe in the last calendar quarter. Others could have similar numbers; 46 of the state's 120 counties had no cases or did not report. Those included some relatively large counties.

Anderson News Editor-Publisher Ben Carlson told Kentucky Health News in an email that his county doesn't show up on the map because most physicians (and the clinic at the local health department) "use a rapid nasal swab, which provides results in about eight minutes but are not reportable. Reportable cases are done with a nasal swab that is sent to a lab."

About half the Kentuckians who have been proven to have influenza in the current season are under 21. That underlines the importance of getting children vaccinated, because they are more vulnerable to serious complications of the flu, which include death. There is still plenty of time to get the vaccine, because flu season runs until May. It takes about two weeks to take full effect.

State officials and health advocates have made a special effort to get Kentuckians vaccinated this season, because last time around, more than 300 people in Kentucky, including five children, died as a result of the flu. The problem is national, and even the Golden Globe Awards got into the act, "with hosts Andy Samberg and Sandra Oh announcing that techs from Rite Aid would be providing flu shots to attendees. This bold move was meant to call out the vocal anti-vaccine celebrities who use their platform to expound views that are not scientifically informed," Sarah Fankhauser reports for Salon.

"Many who refuse to get the flu shot insist that they are not anti-vaxxers," writes Fankhauser, an assistant professor at Emory University in Atlanta and an expert in infectious diseases. "Yet, the arguments spouted by those who refuse to get their shot are grounded in as little scientific basis as those typically given by anti-vaxxers." Those arguments, and the facts to the contrary, include:

Every time I get the flu vaccine I get sick. "You can feel ill after getting the flu vaccine, but you didn’t get the flu from the vaccine," Fankhauser explains. "It stimulates the immune system to make the appropriate antibodies, causes a bit of inflammation and that can cause uncomfortable symptoms. Another explanation is that you actually got sick, either from the flu virus you picked up prior to getting the vaccine, or from a completely different virus altogether." The vaccine is made from dead virus, so it can't inflect you.

I never get the flu, so why should I get the vaccine? "Think about the flu vaccine like buying a lottery ticket—except that the vaccine has odds that are much, much more in your favor," Fanhkauser reports. "The less selfish response: It’s not just about you. Limiting outbreaks and reducing the number of infections benefits everyone. Think about the immunocompromised, elderly or very young. Many people in those categories cannot get the flu vaccine or have limited protection from the vaccine, and they are at greater risk for contracting the flu and for developing severe complications, including death. When everyone gets the flu vaccine, the risk to these individuals is reduced."

It’s so inconvenient; I have to get it every year! "It can be certainly inconvenient to schedule time to get the vaccine each year, but more inconvenient is the huge financial cost to getting the flu," Fankhauser argues. "The costs can include doctor visits, medicine and a reduced paycheck for missing work. Companies and employers have to deal with covering shifts and lost productivity when employees take a week or more off of work to recover from the flu."
Posted by Al Cross at 11:04 PM