Poll: Reported heroin, methamphetamine and painkiller use has increased; 44 percent of those needing treatment didn't get it

Nearly a third of Kentucky adults reported having a family member or friend with a drug problem in the past 12 months, and just over half of those with problems got any sort of treatment, according to the latest Kentucky Health Issues Poll.

The increase in knowledge of friends or relatives abusing prescription drugs was the largest annual increase ever seen in the eight years of the poll, which has been taken each fall. There was also a record rise in reported use of methamphetamine, which has been included in four polls. The increase in reported heroin use continued an upward trend that had slacked off in the 2017 poll. 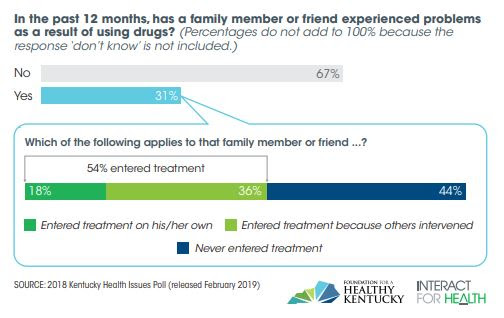 "Our message is that treatment works and recovery is possible," Katie Marks, project director for the Kentucky Opioid Response Effort, said in a news release from the Foundation for a Healthy Kentucky, which co-sponsors the poll. "Engagement in evidence-based treatment enables a person to address the biological, psychological, and social factors associated with a substance use disorder."

The poll is co-sponsored by Interact for Health, a Cincinnati area foundation. It surveyed a random sample of 1,569 Kentucky adults via landline and cell phone. Its margin of error for the statewide samples is plus or minus 2.5 percentage points.

The poll, conducted Aug. 26-Oct. 21, found that heroin and methamphetamine use also varied by region.

Regionally, methamphetamine seems to be a bigger problem in Eastern and Western Kentucky, with 29 percent of adults in the east and 24 percent in the west reporting they knew someone who has a problem with meth, compared to 18 percent in the rest of the state.