E-cigarette users need to watch for symptoms of lung injury and should seek help immediately if detected, health officials warn

If you use electronic cigarettes, contrary to current warnings, it's important to watch for symptoms of lung injury, and to immediately seek medical care if you have any of them: cough, shortness of breath, chest pain, nausea, vomiting, diarrhea, fatigue, fever or abdominal pain.

That was one of the main messages on a Nov. 1 "Lung Injury with Vaping" webinar, hosted by Elizabeth Anderson Hoagland, youth tobacco-prevention coordinator with the state's Tobacco Prevention and Cessation Program.

Also, Hoagland said, it's important for patients who have been hospitalized because of a vaping-related lung injury to make sure they follow up with their health-care provider one to two weeks after discharge and again in three to four months.

"I cannot emphasize this enough," Hoagland said. "The doctors I've been working with have all been really horrified at how sick these people get and how quickly they get sick. So really, that follow-up with a health-care provider is essential."

The federal Centers for Disease Control and Prevention says that because the cause or causes of these lung injuries is unknown, no one should use any e-cigarette or related products -- especially youth, pregnant women, and adults who do not currently use tobacco products.

As of Oct. 29, 1,888 cases of vaping-related lung injury had been reported to the CDC, and 37 deaths have been confirmed in 24 states. The CDC said more deaths are under investigation.

In Kentucky, 31 cases are under investigation, with three of them confirmed and 11 considered probable results of electronic-cigarette use. Seven reported cases have been ruled out. 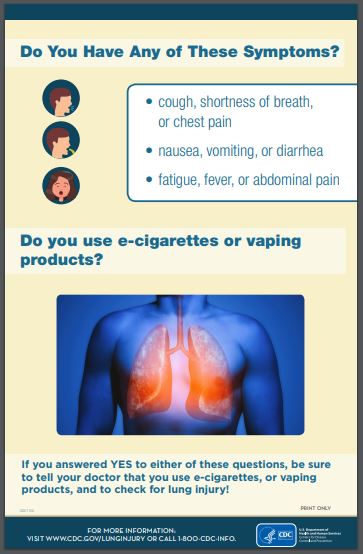 It is still not clear what is causing the lung injuries, "and the only commonality among all cases is that patients report the use of e-cigarettes, or vaping, products," says the CDC.

Hoagland noted that there are at least 450 e-cigarette devices on the market, along with thousands of e-cig liquids in stores, online and on the black market; and e-cig users often mix their own e-liquids.

Many cases have involved black-market products with tetrahydrocannabinol (THC), the psychoactive ingredient in marijuana, but Hoagland stressed that there are other causes.

"Here in Kentucky we have at least one case where someone using a tank-modified product, with nicotine only, became sick," she said. "A lot of the products that have caused illness have been associated with illegal THC products, but it's not only illegal THC products and I think it's very important to have that caveat." She added later, "I can say with confidence that we have people who are getting sick who are not testing positive for THC, which is why we say that no single product or substance has been linked to all cases."

Hoagland said it's important to not buy products off the street, especially THC products, and to not modify or add any substances to e-cigarette, or other products not intended by the manufacturer.

In addition, she noted that some long-term e-cigarette users have gotten sick after trying a new product and said, "This is not the time to experiment with new products."

An open letter about "vaping" from state Commissioner of Education Wayne D. Lewis Jr. and Health Commissioner Angela T. Dearinger links to a long list of resources on e-cigarettes, including options for youth cessation, youth-prevention programs for educators, sources for parents, resources for students and young adults, and general research and information.
Posted by Melissa Patrick at 11:55 PM