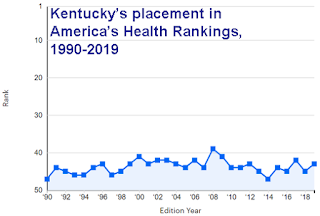 Even though Kentucky moved up two spots in this year's America's Health Rankings, at 43rd, it remains one of the 10 unhealthiest states. That's where the Bluegrass State has been since the rankings were first released in 1990, with the exception of 2008, when it ranked 39th.

The 30th annual report examines 35 measures of health that include factors that influence health, broken into four categories: behaviors, community and environment, policy and clinical care, and health outcomes. Kentucky ranked 42nd for the factors, which are also called determinants, and 44th for outcomes.

Kentucky got its best score for policy, 20th among the states. This higher ranking was largely driven by the state's low share of uninsured adults, 5.5 percent, a rate driven down by the commonwealth's embrace of the Patient Protection and Affordable Care Act and its expansion of Medicaid. Another major factor was the percentage of young children who have been immunized, 71%.

It ranked 29th in the community and environment category, which includes one of the state's strengths, a low prevalence of violent crime.

It should come as no surprise that the behavior category, which includes drug deaths, obesity, physical inactivity and smoking, is the one where Kentucky ranks the lowest, since these are some of the state's greatest ongoing health challenges. Kentucky ranked 49th in health behaviors.

The state ranks fifth for drug deaths, at 32.2 per 100,000 people; fifth in obesity, with an adult obesity rate of 36.6%; last for physical inactivity, with 32.4% of its adults inactive in the 30 days before they were surveyed; and second in smoking, with 23.4% of its adults identified as smokers.

That said, two of the state's strengths also fall in this category: a low prevalence of excessive drinking, 15.9%; and a high rate of high school students graduating, 89.7%.

Kentucky ranked 43rd for clinical care. Standing out in this category is the state's rank for preventable hospitalizations, at 76.6 per 1,000 Medicare enrollees, the worst in the nation. The national rate is 49.4.

Kentucky ranked 44th for its health outcomes. It placed in the national top 10 for six bad outcomes: first in cancer deaths; second for frequent mental distress; fourth for premature deaths; fifth for frequent physical distress; seventh in diabetes, with a rate that has jumped from 12.5% to 13.7% in the last four years; and ninth for cardiovascular deaths.

The online report also comes with an interactive "Adjust My Rank" tool that lets you select four to eight measures and see what kinds of changes would need to happen to improve Kentucky's health ranking. For example, it shows that if Kentucky was able to raise its high school graduation rate to 93.8%, decrease its obesity rate to 32.8%, decrease its smoking rate to 20.2% and decrease its physical inactivity rate to 28.6%, it could dig itself out of a bottom 10 ranking and rank 39th again. 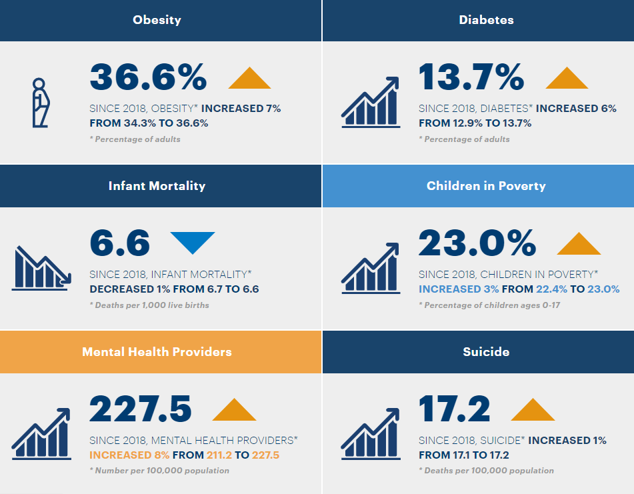 Posted by Melissa Patrick at 10:55 PM