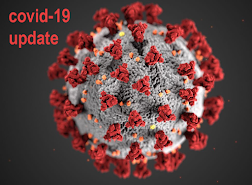 By Al Cross
Kentucky Health News
Kentucky recorded 1,039 more cases of the coronavirus Friday, the third day out of the last four and only the sixth overall that the number has exceeded 1,000. The high was 1,163 on Aug, 12; Sept. 19 saw 1,002.
Friday's number raised the seven-day rolling average of new cases to 837, more than 100 higher than a week earlier and almost four times as high as it was three months ago.

“The situation is getting very dangerous in Kentucky,” Gov. Andy Beshear said. “If you care about your economy, if you care about getting your kids into school, if you care about the lives of those around you, put on your mask. Socially distance; wash your hands; follow the rules. We’ve got to be Team Kentucky right now. We need your help and I know you’re going to come through.”
Earlier in his news release, Beshear said the word that President Trump, his wife and some advisers had tested positive “shows you that anybody can get this. We wish them the best and a speedy recovery, and this is an example of why we all have to be wearing masks. We all have to do our part.”
The release was issued about 20 minutes before the White House press office said the 74-year-old Trump would be admitted to Walter Reed National Military Medical Center. Earlier, it said he had a fever and was fatigued, and was taking the maximum recommended dose of experimental antibiotic cocktail as therapy. Melania Trump, 50, was reported to have a cough and a headache.
Democratic presidential nominee Joe Biden, 77, wished Trump and the first lady a “swift recovery” in a tweet, then tested negative twice and made a speech in Michigan, wearing a mask from start to finish and urging his audience to do likewise. Trump had mocked Biden for wearing a large mask.
The White House said mask wearing in the building would remain optional. Vice President Pence and his wife have tested negative, his office said. Trump faces "the most serious known medical threat to a sitting president in decades," said CNN, which reported other cases at the White House.
Senate Majority Leader Mitch McConnell wouldn't say whether he has been tested for the virus in the past week, the Lexington Herald-Leader reports. “Have I ever been tested? Yes,”he said. “I’m not going to answer questions about when. We are following the guidelines that we’ve been given by the CDC.”

In other covid-19 news Friday:
Posted by Melissa Patrick at 5:24 PM