Study estimates that secondhand smoke kills 42,000 Americans a year, and 900 of those are babies 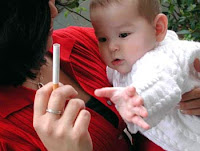 More bad news for smokers and those who love them: A report out this week in the American Journal of Public Health says secondhand smoke is accountable for 42,000 deaths of non-smokers each year in the U.S., including nearly 900 infants. Kentucky likely has more than its share of those deaths because the percentage of Kentuckians who smoke is the nation's highest.

The study at the University of California, San Francisco notes that those annual deaths represent nearly 600,000 years of potential life lost and $6.6 billion in lost productivity, amounting to $158,000 per death.

The study by Wendy Max a professor of health economics at the UCSF School of Nursing, involved the first use of a biomarker to gauge the physical and economic impacts of cigarette smoke, and revealed that secondhand smoke exposure disproportionately affects African Americans, especially their infants.
Posted by Amy Wilson at 1:19 PM