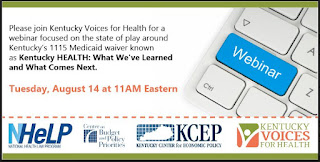 Kentucky Voices for Health will host a webinar
titled "Kentucky HEALTH: What We've Learned and What Comes Next" Tuesday, August 14 at 11 a.m. EST.

Kentucky HEALTH, for Helping to Engage and Achieve Long Term Health, is the official name for the state's new Medicaid plan that was set to go into effect July 1, but instead was vacated by a federal judge who said the U.S. Department of Health and Human Services had not adequately considered the state's estimate that in five years its Medicaid rolls would have 95,000 fewer people with the plan than without it, in large measure for non-compliance with its requirement. The judge sent the plan back to HHS for more review.

HHS has opened up another public comment period on Kentucky HEALTH that ends Aug. 18. As of Aug. 7, the Medicaid.gov website showed more than 300 comments had been submitted. State officials told legislators that they're working "toward a re-approval" of the plan and haven't decided on an appeal.

The webinar is open to "state partners working to protect coverage for Kentuckians" and is closed to the news media. Click here to register.

The registration page says the webinar will discuss the the Trump administrations push to get states to adopt a Medicaid work requirement; the recent federal court decision about Kentucky HEALTH; and  the national work requirement debate.

It will also discuss the latest research on work requirements, recent experiences from other states, like Arkansas, that have begun implementing work requirements, successful strategies for defeating bad state proposals and takeaways from recent messaging research.
Posted by Melissa Patrick at 7:12 PM