Kentucky ranked 42nd in America's Health Rankings this year, up from 45th last year, but there's little to celebrate

Kentucky moved up three notches in the latest America's Health Rankings, from 45th to 42nd, but its improvement stemmed mainly from gains in the factors that determine health, not the actual health outcomes. The state was 39th in health determinants (clinical care, policy, community and environment) but 46th in outcomes, such as the death rate from cancer, which is the nation's worst.

That was reflected in the rankings of behaviors, such as the smoking rate and the rate of drug deaths, both second largest in the nation, as well as obesity and physical inactivity. But the behavior score was helped by a high rate of high-school graduation and a low rate of excessive drinking.

The state's highest rankings came in health policy. It was ninth in the nation in the percentage of residents covered by health insurance, thanks to its expansion of Medicaid under the Patient Protection and Affordable Care Act. It also ranked better than average in some measures of community and environment, such as infectious diseases.

"Kentucky made progress in some areas, including expanding the number of residents with health insurance, but drug deaths are up dramatically, and our high rate of obesity remains a challenge," said Ben Chandler, president and CEO of the Foundation for a Healthy Kentucky. "Our high smoking rate is a plague we know how to address, however. It's a huge contributing factor to our ranking as the cancer capital of the nation and our inability to reduce low birth-weight babies, heart disease and premature death. Smoking rates declined 2 percent nationally since last year, but only 1.4 percentage points in Kentucky. Raising the tobacco tax by at least $1 and enacting more smoke-free laws in counties and cities across the Commonwealth are two measures that will kick-start a greater decline in smoking rates and better health." 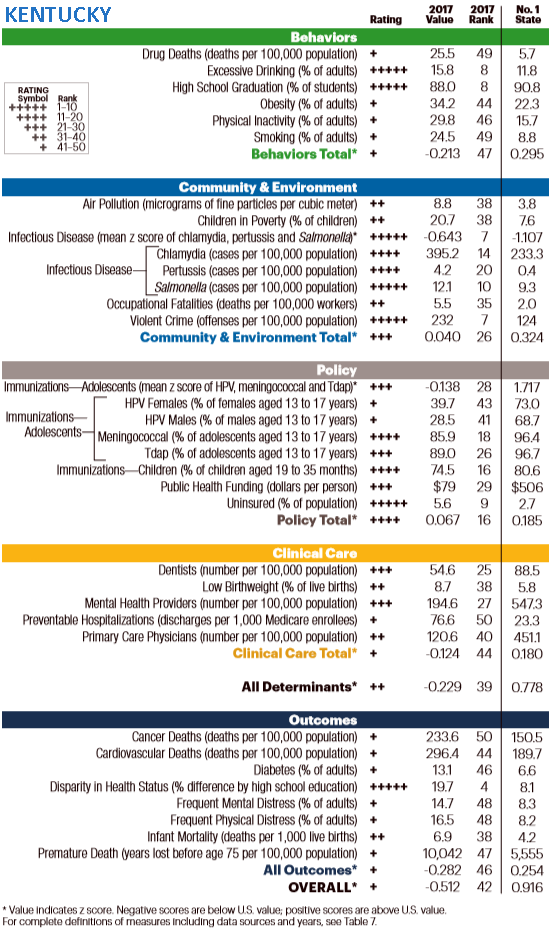