The Congressional Budget Office estimates 3 million fewer people will get health insurance than expected before the U.S. Supreme Court's decision on the Patient Protection and Affordable Care Act. The CBO forecasts that will reduce the law's estimated cost by $84 billion over the next 10 years.

Fewer people will have coverage because some states will opt not to expand their Medicaid programs up to 138 percent the federal poverty level — an option states now have because of the decision. This runs counter to a report by the conservative American Action Forum that predicted states declining to expand Medicaid would increase the law's cost.

Sarah Kliff of The Washington Post breaks down the nonpartisan congressional agency's calculation: "The CBO estimates that for every person who does not enroll in Medicaid, and because of that goes uninsured, the federal government saves $6,000 in spending by 2022. For the average person who does not enroll in Medicaid, but instead gets subsidized coverage from the health-insurance exchange, the federal government spends $9,000 — $3,000 more than they would have had those individuals been on Medicaid."

Thus, the CBO says it will be more expensive for taxpayers if more people are on Medicaid instead of getting their insurance from the exchanges. With about 6 million fewer people than expected on Medicaid, and only about 3 million signing up for insurance exchanges, leaving 3 million more uninsured than expected, "The projected decrease in total federal spending on Medicaid is larger than the anticipated increase in total exchange subsidies," the CBO notes. Here is its graphic representation: 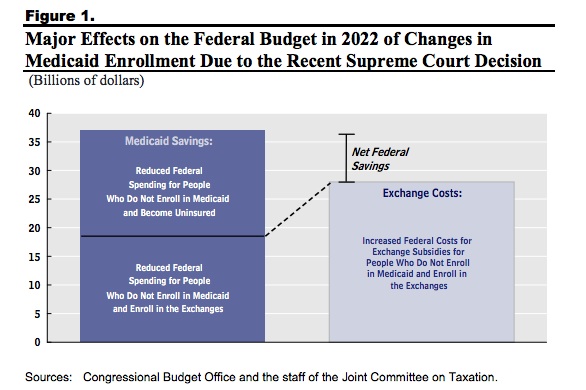