Children's health and education improves in Kentucky, but one in four kids lives in poverty, report shows 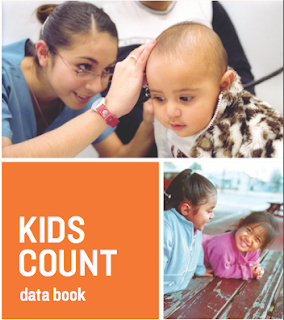 New data show one in four Kentucky children live in poverty, a sharp increase since 2005, but the state is improving when it comes to children's health and education. These were the latest findings in the influential Kids Count report by the Annie E. Casey Foundation, as assessment of children's overall well-being in the country.

Compared to national averages, fewer Kentucky children go without health insurance (6 percent compared to the nation's 8 percent) and there are fewer teens who abuse alcohol or drugs (6 percent in Kentucky; 7 percent nationwide).

These were some of the 16 factors, shown below, that the report used to assess overall child well-being. The factors fell into four main groups: economic well-being, family and community, education and health. Kentucky ranked a somewhat dismal 35th among the 50 states in overall well-being of children. But in education, it was 28th, and in health, 25th. 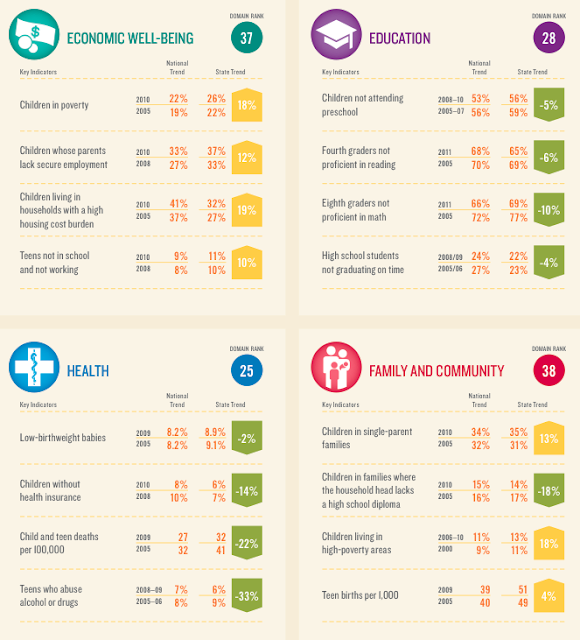 The report shows the share of Kentucky children living in poverty grew by 18 percent from 2005 to 2010, meaning they lived at or below the federal poverty line. In 2010, that meant "an annual income of less than $22,113 for a family of two adults and two children," Valarie Honeycutt Spears reports for the Lexington Herald-Leader.

The Courier-Journal's Jessie Halladay points out that more children have access to health insurance in part because of a statewide push to get more children enrolled in the federally funded Kentucky Children's Health Program, known more commonly as KCHIP. Now, about 65,000 children are enrolled. "We are clearly making a difference in easing the difficulty these tough economic conditions put on our families," said Gov. Steve Beshear, who launched the effort.

But much work remains to be done, points out Terry Brooks, executive director of Kentucky Youth Advocates. He referred to the fact that while more fourth-graders are proficient in reading than they were in 2005, a whopping 65 percent of them were still not considered reading proficient in 2010. "At one level you want to celebrate us doing well compared to other states, but you can't celebrate too much," Brooks told Halladay. (Read more)
Posted by Tara Kaprowy at 12:30 PM