The latest County Health Rankings report for Kentucky shows little change among the top and bottom quarters of the standings, but a good deal of movement among counties in the middle -- in both directions. 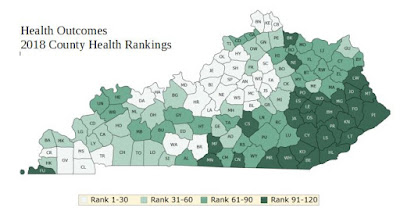 The rankings look at health outcomes, gauged by life expectancy and measures of quality of life; and health factors, such as access to physicians and areas to exercise, tobacco use, children living in poverty, violent crime, long commutes and other environmental factors.

The rankings compare a state's counties against each other without comparison to national data, so when one county moves up, another moves down.

Most counties showed some shift in the rankings, but the differences may be so small they they are statistically insignificant. So, the University of Wisconsin Population Health Institute emphasizes a county's quarter (statistically, a "quartile" of 30 counties) as the best overall indicator of its health status. The rankings should be viewed more as a general categorization of a county's health status than to make specific comparisons with counties that are relatively close in the rankings.

Oldham and Boone, two of Kentucky's wealthiest counties, continue to be the top two for health outcomes, as they have been since the rankings began in 2011. No. 3 Shelby County, which borders Oldham, has been in the top five since 2013. Adjoining Spencer County is ranked fourth. It adjoins Bullitt County, which ranked fifth. All of these counties are either in or near major metropolitan areas, which typically have better access to medical care as well as higher incomes.

Bullitt has shown considerable improvement recently. It jumped to sixth in outcomes 2016, from 27th in 2015, and was in the top 10 last year.

Breathitt, Wolfe and Owsley counties, in that order, have been the bottom three in outcomes for the past three years. Leslie and Perry counties make up the rest of the bottom five this year. All are in the East Kentucky Coalfield. 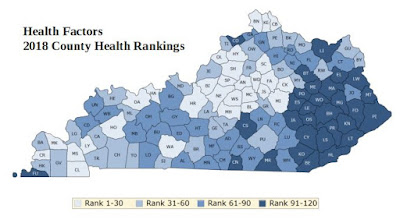 Oldham and Boone are also the top two counties in health factors, and have been since 2015. They have been in the top five since 2011. Woodford, Campbell and Spencer are currently ranked third, fourth and fifth, respectively.

The bottom five counties for health factors are Clay, Harlan, Knox, Leslie and McCreary, all in the eastern coalfield.

Since 2011, some counties have seen big improvements in their rankings, while others have declined and others seem to bounce back and forth, perhaps because they are small and thus more likely to have their rankings changed from year to year.

Hickman is an example of how a county's rankings can fluctuate, and why it's important to look at multi-year trends. Last year, the Mississippi River county ranked 23rd in outcomes, up 53 spots from the initial 2011 report -- but it fell 20 notches this year, to 43rd. Its health-factor ranking also fell 20 places, to 57th, after improving to 23rd in 2016.

Henderson County also saw a surge of improvement in both of last year's rankings, only to drop back to some of its lowest rankings in outcomes and factors this year. The northwestern county dropped 31 outcome spots, to 70th from 39th last year, and 15 factor spots, to 55th from last year's 40th.

One of this year's success stories is Garrard County, which saw a 25-notch jump in outcomes, moving to 39th from 64th last year -- its worst ranking for this measure since the rankings began. The southern Bluegrass county also saw an improvement in its health-factor ranking, to 38th from 54th last year. It had ranked between 51st and 65th in health factors since 2013.

Christian County improved 22 notches in factors and and 18 places in outcomes over last year.

Bracken saw the greatest drop in health outcomes this year, falling 43 notches to 98th from last year's 55th. Nevertheless, it showed an improvement of 10 notches in the health-factor ranking, to 33rd.

The report charges Kentucky counties to take this data and turn it into action, and offers specific strategies to do so on its What Works for Health website. Some of the suggestions include ways to invest in education, ways to improve employment along with improved family and social supports, ways to increase access to comprehensive sex education in both schools and communities and ways to increase social connections in communities.

The report also reminds counties to look at the health outcomes and health factors in their communities related to the racial and ethnic backgrounds of their residents, noting that these numbers are often masked when we only look at the differences based on place. For example, the report notes that 14 percent of babies born to black mothers in Kentucky are born with a low birthweight, compared to 8 percent of babies born to white mothers or 7 percent born to Hispanic mothers.

Click here to view an interactive map of your county's rankings, with details for each measurement.
Posted by Melissa Patrick at 10:11 PM