State not keeping up with 'explosion' of babies with hepatitis C 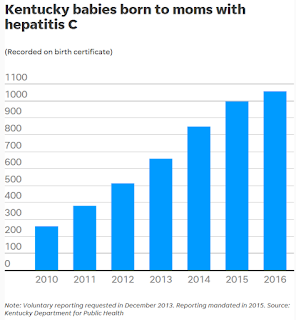 The dangerous liver virus hepatitis C "has skyrocketed among Kentucky births amid the state’s raging drug epidemic, but attempts to prevent, track and control the infectious, curable disease have fallen short," Laura Ungar reports for the Louisville Courier Journal. That means many kids don’t get the care they need, risking cirrhosis and liver cancer in adulthood — or even early death."

Just how many Kentucky children develop the disease is unknown, "because state records show most don’t get the necessary testing when they grow out of their moms’ immunity as toddlers," Ungar writes. "Research suggests Kentucky fares much worse than other states because drug use among young women is so widespread."

“We have seen a dramatic increase in the number of cases of children exposed to hep C – an explosion,” said Dr. Kristina Bryant, a pediatric infectious disease specialist affiliated with Norton Children's Hospital, told Ungar, who notes, "The true scope of the problem is even bigger; more than half of people with hep C don’t know they have it."

Ungar discovered another problem: Kentucky officials aren't tracking, preventing and testing for the disease as diligently as they could.

"Staffing shortages have kept cases from this year and last — and a backlog of previous cases involving children — from even being entered into computers," she reports. "Moms and kids have often gone untested. Hep C screening isn’t mandatory. While it’s recommended for moms at high risk, doctors don’t always ask about drug use and women don’t always admit to it. Plus, babies whose moms have hep C commonly don't get follow-up testing, especially when they’re raised by someone else."

Ungar adds, "Overall efforts to curb hep C have failed." She notes Kentucky had the nation’s highest rate of acute hep-C infections in 2010-14, and "The state and federal governments spend a fraction of what advocates consider necessary to fight the disease; groups are asking for $100 million more at the federal level."

Ungar's story, which took up more than two pages in the Courier Journal's print edition, includes several case studies of families affected by the disease. It was initially published online by USA Today, for which she also works.
Posted by Al Cross at 8:37 AM