Kentucky has long ranked high among the states in the number of counties. Now it leads the nation in the number of local syringe-exchange programs, according to the state Cabinet for Health and Family Services. But most of the counties deemed most vulnerable to outbreaks of HIV or hepatitis C due to intravenous drug use have not approved exchanges.

Forty-five of the state's 120 counties have approved syringe exchanges "in an effort to link people to treatment and improve overall public health," the cabinet says in a report on a recent syringe-exchange summit held by its Department for Public Health and the Kentucky Office of Drug Control Policy. The summit included people from counties without exchanges, to "help them, support them, encourage them in getting a syringe-exchange program going," said Dr. Ardis Hoven, the department's medical consultant.

"It's not just about the needle," Hoven said. "It's about folks getting tested for HIV and hepatitis C; it's about getting folks into care if they're positive for HIV or hepatitis C. It's also about getting those individuals with substance-abuse disorder into treatment . . . and we know that happens five times more frequently if they're engaged in a syringe-exchange program."

State Justice and Public Safety Secretary John Tilley said the exchanges are a better alternative than arrest and prosecution. "There's nothing more devastating than continuing to use a criminal-justice hammer to address a public-health nightmare," he said. "You exacerbate the problems the individual already has . . . When you entangle somebody in the criminal-justice system, you increase the likelihood that they'll not recover."

In 2016 the federal Centers for Disease Control and Prevention listed 220 U.S. counties most at risk to outbreaks of HIV or hepatitis C as a result of intravenous drug use. Of those counties, 54 are in Kentucky, and 26 of them have approved syringe exchanges. Approval is required by the county health board, fiscal court and legislative body of the city where the exchange is to be located. Here's a map from the cabinet: 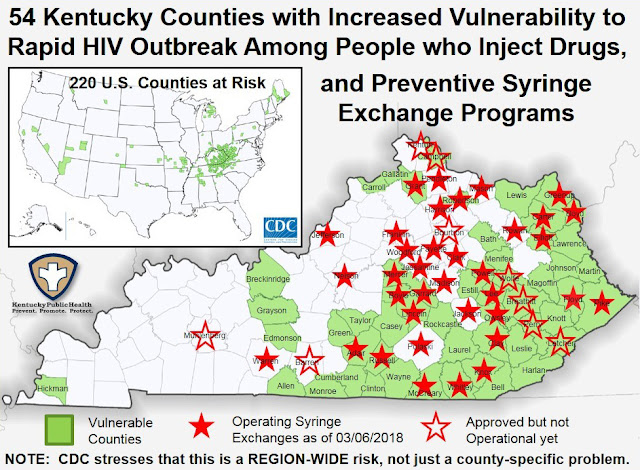