LEXINGTON – Obese children and adolescents in rural Kentucky weigh more than their obese counterparts in the state's urban areas.

That was one of the research findings reported at the eighth annual Barnstable Brown Diabetes Center Research Day at the University of Kentucky, where researchers from UK and other regional institutions shared their latest research on obesity and diabetes.

BMI is a ratio of height to weight and is used as a screening tool to indicate whether a person is underweight, a healthy weight, overweight or obese. A healthy weight score ranges from 18.5 to 24.9, with higher figures considered overweight and 30 the threshold for obesity.

Other studies have shown that pediatric obesity is higher among low-income families, and nearly one-fourth of Kentucky's children live below the poverty line in rural areas and the Appalachian region, noted Dr. Aurelia Radulescu, medical director of the Kentucky Children's Hospital Pediatric High BMI Clinic. 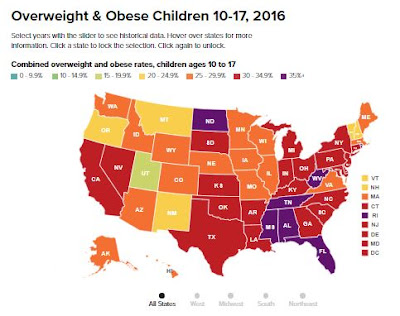 Nearly one in three Americans from age 10 through 17 is overweight or obese, according to the State of Obesity report. Kentucky's rate of 33.5 percent ranks it 14th among the states.

The study looked at 629 Kentucky children, 2 to 18, with a BMI greater than or equal to the BMI of 95 percent of those of the same age and sex.

The study found that the rural children had higher lipid profile, or cholesterol, levels and higher liver-enzyme levels than the urban children, which Radulescu said put them at a higher risk of heart disease and fatty liver disease, respectively.

The researchers also reported that "a high proportion" of the obese youth had pre-diabetes and were short of vitamin D, which facilitates the body's absorption of certain minerals.

Radulescu said the results are important because they support early screening for these "metabolic abnormalities," which can provide an important tool to discuss the effects of obesity and weight gain in children, and be used as a way to motivate families to change lifestyles that lead to obesity.

Radulescu noted that the study did not consider family history or other social determinants of health. Other researchers in the study were Dr. Hong Huang, Mary Killian, Dr. Carmel Wallace and Dr. Henrietta Bada.
Posted by Melissa Patrick at 10:57 PM