Preventing kids from falling into addiction is a major goal for Operation UNITE, a nonprofit serving 32 counties in Eastern Kentucky -- a region where the average age for first drug use is 11, Laura Ungar reports for the Louisville Courier Journal. 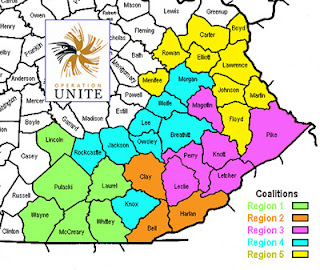 “If it could be copied and replicated in other areas of the country, that would be fantastic,” Linda Richter, director of policy research and analysis at the New York-based Center on Addiction, told Ungar. Research shows “there’s no simple way to prevent substance abuse.You really need a comprehensive solution.”

This comprehensive approach includes summer camps, school-based service clubs and community events that feature real-life stories of addictions, all with the end goal of keeping children off drugs. writes that the message is always the same: "Drugs can destroy their future."

Ungar writes about the "real-life" story of Kayla McClure of Rockcastle County, who was addicted to heroin, but is now in recovery. At the community's annual celebration of Operation UNITE in Mount Vernon, McClure shared her "cautionary tale" of addiction and recovery.

Jamie Cromer, one of McClure's three daughters, told Ungar that she still checks her mom’s arms for fresh needle tracks, which she said is a "lingering habit" from the days when her mom used to shoot up heroin.

“I’m proud of her,” her daughter Kenya told Ungar, who, at age 13, is part of a UNITE anti-drug club at the same age her mom started popping pills. “I don’t want to end up like her.”

Jaime, Kenya and their 16-year-old sister, Gracelynn, who were raised by McClure’s parents, told Ungar that they had all three pledged  never to try drugs.

Ungar writes about several Rockcastle County Unite programs, one that teaches fourth- and fifth- graders at Mount Vernon Elementary School about wellness, healthy choices and how to plan for the future and another highly popular event called the UNITE Bowl Football game that collects toilet paper for drug treatment centers. She also writes about an outdoor activity program called Impact Outdoors in Manchester that is funded by UNITE.

Since its inception in 2003, UNITE leaders told Ungar, they estimate the organization and its community coalitions have reached more than a million children through prevention and education activities. The state provides $2 million and another $1.3 million comes from other sources, such as private donations and the federal AmeriCorps program for public-service work.

A 2017 U.S. Centers for Disease Control and Prevention survey found that about one in eight Kentucky 12th graders reported abusing pain medicines at some point, nearly half said they’d smoked pot and about one in 60 said they’d injected illegal drugs at least once.

UNITE, which was launched by Fifth District U.S. Rep. Hal Rogers, R-Somerset, is an acronym for Unlawful Narcotics Investigations, Treatment and Education. Ungar notes that just over half of the organization’s budget goes to prevention and education.


Rogers told Ungar that keeping kids off drugs is crucial to the future of the region and “UNITE has been reasonably successful at that.”

CEO Hale told Ungar that while researchers at the University of Kentucky are studying the prevention outcomes, anecdotally, she said, “Young people in college and the workforce often tell us they’re there because of UNITE.” Recently Hale said she had fielded calls from Maryland, Tennessee, Ohio and other states asking about replicating UNITE.

How to get help: Operation UNITE is one of several partners of FindHelpNowKY.org, a real-time substance use disorder treatment locator and information center for Kentucky. To find the closest treatment facility near you or a loved one visit the site; call toll-free at 833-8KY-HELP (833-859-4357); or text HOPE to 96714.
Posted by Melissa Patrick at 11:39 AM