Meth resurges in Ky. and is cheaper and more lethal than ever

"While Louisville frantically tries to rescue residents from heroin, fentanyl and pain pills, another drug is creeping back to prominence: crystal meth," Beth Warren reports for the Louisville Courier Journal.

And while the drug can be made through a "simple but dangerous process of mixing easy-to-get ingredients," there are fewer local labs these days and most of it now is being made in Mexico by cartels and is "cheaper, easier to get -- and more lethal," Warren writes. "And sometimes it's secretly mixed with fentanyl, which is even deadlier than heroin."

"It's deadlier than the public perceives," Russell Coleman, U.S. attorney for Western Kentucky and a former FBI agent who has worked drug cases, told Warren. "Methamphetamines are the next phase of the drug epidemic in this commonwealth."

Steven Bell, a spokesman for the U.S. Drug Enforcement Administration, told Warren that today's meth, often dubbed "ice," has a purity often close to 100 percent, which is "much more lethal than the 50 percent purity of local one-pot labs."

Warren notes that meth never really went away, but instead has "resurged."

Dave Thompson of The Paducah Sun recently reported that in Western Kentucky and Southern Illinois, methamphetamine is the "drug of choice," according to law enforcement and rehabilitators in the region. 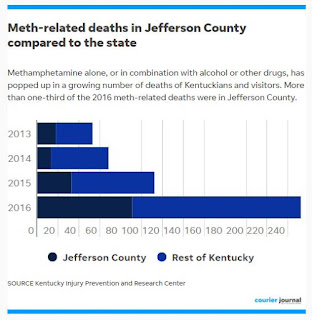 "Meth-related deaths in Kentucky more than tripled from 2013 to 2016, when 252 people died, according to the Kentucky Injury Prevention and Research Center. More than a third of those deaths were in Jefferson County," she writes. "Police across Kentucky intercepted more than triple the amount of meth last year than they did in 2013, according to a recent state police report. Nearly 11,000 drug seizures submitted to the state crime lab last year were meth — more than heroin, cocaine and fentanyl combined."

Coleman pointed out that because meth damages the body over time, causing things like convulsions, strokes and heart attacks that aren't always associated with the drug, it isn't always recognized for the "havoc it wreaks," Warren writes.

She notes that today's meth looks like chunks of clear glass with a slightly blue tint and can also come in white pills that can be crushed into a powder.

Charles Wilson, 32, a self-described "meth head" who is in recovery, told Warren, "It's safer and cheaper" to purchase meth from a cartel instead of a local lab, adding that he used to pay about $700 for an ounce of meth in Albany, Ky. Louisville Metro Police Sgt. Paul Neal, a veteran narcotics detective, told Warren that the drug is cheaper in Louisville, as low as $300 per ounce, because there is more available.

Coleman told her that police now are finding as much meth as marijuana on interstate and local roadway traffic stops. And because meth causes its users to become paranoid and agitated, it's often referred to as "the drug of violence," especially compared to heroin which causes user to become lethargic.

Unlike heroin, there's no antidote or medication-assisted-treatment for meth, though addiction specialists told Warren that they are optimistic that these intervention and treatment options will eventually be developed and approved.

Posted by Melissa Patrick at 5:41 PM