LEXINGTON – After learning that nearly three-fourths of Kentucky adults reported having had one or more problems affording health care in the past year, two Democrats and one Republican in the legislature found they had much to agree on when it came to finding ways to address this problem.

The lawmakers were part of a legislative panel at a Kentucky Voices for Health forum to discuss the results of the new health-care affordability survey  The forum was held May 14 in Lexington, with nearly 50 health advocates in attendance.

When the legislators were asked what they'd do if they could wave a magic wand to improve Kentucky health care, Sen. Morgan McGarvey, D-Louisville, said he would have raised the cigarette tax $1, not the 50-cent hike that passed in the last legislative session.

He noted that research indicates a 50-cent increase will not significantly reduce the state's smoking rate or have any impact on the its health because cigarette companies will offer rebates to make up the difference. McGarvey said he knew a House member who has already received a 50 cent rebate in the mail, though the increase hasn't taken effect.

The only Republican on the panel, Rep. Kim Moser of Taylor Mill said, "I don't disagree with either of my colleagues here."

Moser, who is also the director of the Northern Kentucky Office of Drug Control Policy, added that it's important to address the many issues around addiction in Kentucky.

"Until we really invest in early childhood learning, early prevention, and early identification of those individuals who are at risk, whether it's because of a mental health issue or their family situation -- whatever it is that places them at risk -- I think we need to really hone in on that," she said.

The panel's bipartisan agreement was supported by the affordability survey, which found "deep bipartisan support for change," according to Lynn Quincy, an official of Altarum, the company that conducted the study. 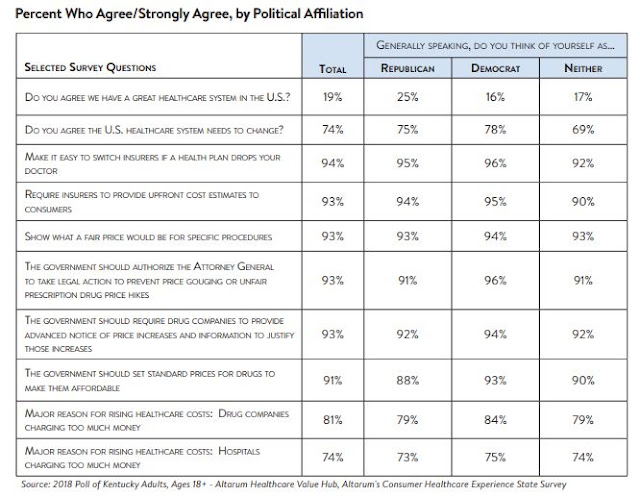 For example, 74 percent of participants said they agreed with the statement, "The U.S. health-care system needs to change," there was little difference among Republicans, Democrats and those who said they identified with neither party.

And when asked about the "major reasons" for the high cost of care, such as drug makers, hospitals and insurance companies charging too much money, or support for specific changes such as making it easier to switch insurers if your health plan drops your doctor, there was also bipartisan agreement.

One attendee suggested a #WeAgree campaign to inform people that when it comes to health-care affordability burdens and solutions, there is little partisan divide. Quincy agreed.

"We need to agree and come together as consumers to counteract extremely powerful stakeholders elsewhere in the system," Quincy said. "We've got to give our elected representatives cover, and I think with this false narrative of division they don't have that cover."

Emily Beauregard, executive director for Kentucky Voices for Health, charged the policymakers to find ways to align the state's health-care system with the needs of Kentuckians.

"As health advocates, we believe that it is critical that Kentucky policy makers understand the high cost on their constituents and work toward policy solutions that will bring relief," she said.

Insurance and care are expensive; collection agencies contacted 1/4 in poll

The survey also found that the 72 percent of Kentucky adults who struggled to pay for health care in the past year reported that their affordability issues largely centered around not being able to afford insurance, delaying or foregoing care because of cost, and struggling to pay medical bills. One in four participants said they had been contacted by a collection agency.

The regional results showed that 80 percent of adults in Eastern Kentucky said they had had affordability burdens in the past year, the highest rate of any region.

The forum also included a panel of four Kentuckians who told about how they or their small businesses had struggled with health-care costs.

Kristi Roberts said she works for a small business that has provided health insurance for its employees since 1948. She told the group that their health-coverage costs have been increasing yearly for some time, but that this year's 27 percent increase has put them in danger of dropping insurance.

Debbie McAfee, who has been diagnosed with multiple sclerosis and works as an advocate for those with the disease, said the cost of treatment has jumped from $8,000 per year to upwards of $90,000 a year, between 1993 and 2017, with no major modifications to the drug.

Jane Harrod, a Lexington farmer, said she didn't have health insurance when she suffered an accident that required emergency surgery, but she was able to find a surgeon who offered a discount and allowed her to pay out of pocket. She said that since she's been off work she's been on Medicaid, but after she goes back to work she'll be without insurance again because she won't be able to afford it.

Megan Naseman of Berea said she had been recently hospitalized for sepsis and had paid $4,500 for medical expenses since January. She told about her choice to delay emergency room care at 2 a.m. for what could have been a recurrence of the disease because the Anthem nurse couldn't promise her that the visit would be covered if she went to the emergency room.

The survey, taken Feb. 7 to Feb. 23, included more than 900 Kentucky adults and was conducted by Altarum Healthcare Value Hub, with support from the Robert Wood Johnson Foundation.
__________

OTHER COMMENTS FROM LEGISLATORS

Stone noted some of the largely bipartisan measures the legislature has passed in recent years, such as expanding the scope of care by advanced-practice registered nurses, pharmacists, physical therapists and physician assistants; increasing access to colon and breast cancer screenings; requiring insurers to cover autism; and funding major research with funds from the 1998 settlement with cigarette makers.

"When you expand the availability of health care you just by definition make it certainly more available and hopefully more affordable," Stone said.

McGarvey said, "I think when you talk about it as cost, we do ourselves a disservice, because it's not a cost when you talk about health care; at a basic level you are talking about justice or injustice. . . . You shouldn't be threatened with your home, with your life because you did everything right and the hospital didn't tell you in advance that the doctor working that day wouldn't be covered by your insurance, even though you thought they would. It's not rich or poor, smart or dumb. I don't know the person who could figure that out in real time at that moment. Or have any choice about it."

Referring to the state's changes in Medicaid, McGarvey said, "We had the best model for delivering healthcare in the country, and since it wasn't broke we decided to fix it. There is absolutely nothing that shows a costs savings in real dollars. In particular, in human costs and justice to people. . . . I'm seeing a little bit more bipartisanship in some of these conversations when we talk about data and research and take the politics out of it."

Moser said of the changes, "I think it's very important to put things in place that don't create barriers for individuals to get treatment, but at the same time we do need to find a sustainable model. We can't just keep paying for things that don't necessarily work."

She noted a bill that recently became law that focuses on addiction treatment and bases payment on following best-practice standards to get paid. "We're really paying attention to what works and what we can afford," she said, "because we have to do both."
Posted by Melissa Patrick at 9:32 PM