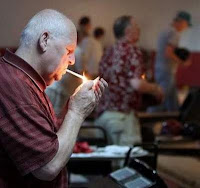 ﻿Kenton County's smoking ban took effect today, making it the first county in Northern Kentucky "to ban smoking in most public places," Cindy Schroeder reports for The Kentucky Enquirer. "The controversial ordinance approved by the outgoing Kenton Fiscal Court in December requires offices and public establishments such as restaurants, churches, bowling alleys, bingo halls and retail stores to go smoke-free. Private clubs and 'drinking establishments' that meet certain requirements can apply for an exemption." (Enquirer photo by Patrick Reddy: Richard Gordon of Florence, in Boone County, lights up at the Super Bowl in Erlanger, in Kenton County.)

The urban counties on either side of Kenton have no smoking bans. Advocates of a ban tried to get all three counties to adopt the same legislationm, but Boone County rejected the idea, and a newly elected fiscal court in Campbell County repealed a ban that was enacted by the former court last year and had not gone into effect. Now Kenton County businesses fear the sole ban in the region will drive customers to other counties, and "Both opponents and supporters of smoke-free legislation agree that Kenton County's partial ban allowing exemptions for some, but not all public places, is confusing and will be difficult to enforce," Schroeder writes. Still, "People on both sides of the issue say it's only a matter of time, however, before all of Kentucky goes smoke-free, just as Ohio and 22 other states have done." (Read more)
Posted by Al Cross at 11:26 AM