Dec. 1 is World AIDS Day; 1.2 million Americans are thought to be infected, but only 1 in 5 know it 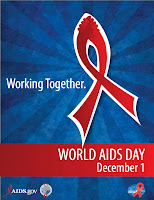 Friday is World AIDS Day, an opportunity to learn the facts about the virus and show support for people living with it.

In the United States, there are 1.2 million people living with the HIV infection, which leads to AIDS. Of those who are infected with the virus in the U.S., only one in five know they have it, the Centers for Disease Control and Prevention report. Each year, about 50,000 Americans become infected. About 1,700 Kentuckians were diagnosed with HIV between Jan. 1, 2005 and Dec. 31, 2009; Kentucky ranks 19th in the country for the number of people who have the HIV infection.
Since the epidemic began, nearly 594,500 people have died with AIDS in the U.S. Between 1981 and 2007, more than 25 million people have died from the virus around the world.
Secretary of State Hillary Rodham Clinton spoke of the epidemic in a Nov. 8 address at the National Institutes of Health. "The fight against AIDS began three decades ago in June 1981. American scientists reported the first evidence of a mysterious new disease," she said. "Thirty years later, we ... know a great deal about the virus itself. We understand how it is spread, how it constantly mutates in the body, how it hides from the immune system. And we have turned this knowledge to our advantage."
Most at risk are gay, bisexual or other men who have sex with men. The CDC estimates that though this population accounts for just 2 percent of the U.S. population, it accounted for 61 percent of all new HIV infections in 2009. But heterosexuals and people who inject drugs can also contract the disease. Heterosexuals account for 27 percent of new cases. Another 9 percent of people who contracted the virus did so by using injected drugs.
Blacks accounted for 44 percent of new HIV infections in 2009, though they only represent 14 percent of the U.S. population. In 2009, the rate of new infection was 6.5 times greater for black men than it was for white men.
People can now be tested for the infection using a saliva sample and have the results in just 15 to 20 minutes. To find an HIV/AIDS prevention and service provider by county, click here.
Posted by Tara Kaprowy at 5:30 PM