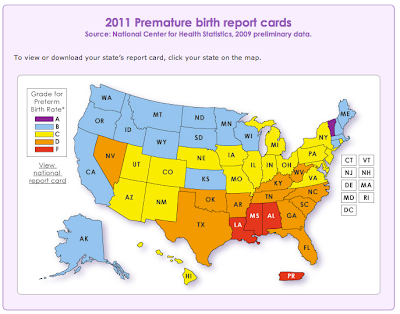 Giving birth to a baby before it has been brought to full term has become less common in the U.S. and Kentucky, but the nation still only received a C, and the state a D, in the 2011 Premature Birth Report Cards compiled by the March of Dimes. Each year, nearly half a million babies are born prematurely.

In Kentucky, 13.6 percent of women gave birth to babies prematurely in 2009, down by 0.4 percentage points over 2008. Only Vermont was given an A, with a pre-term birth rate of 9.3 percent, reports Bonnie Rochman of Time Healthland. Three states and Puerto Rico got Fs; 19 got Cs and 11, as well as the District of Columbia, got a D.
Data from 2006 to 2009 were analyzed. In 2009, the preliminary preterm birth rate was 12.2 percent, compared to 12.8 percent in 2006. The March of Dimes wants that number to drop to 9.6 percent by 2020. Pre-term birth is the leading cause of newborn death in the U.S.
The study analyzed three factors that can contribute to pre-term birth, including the percentage of uninsured women in each state and the percentage of women who smoke. Late pre-term birth, which occurs when a baby is born between 34 to 36 weeks gestation, was also considered, as it "has been linked to rising rates of early induction of labor and C-sections," the study says. 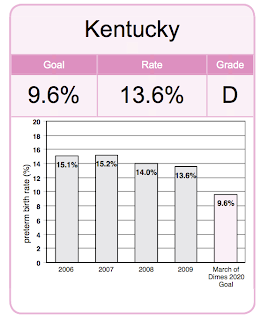 In Kentucky, the percentage of uninsured women has remained the same at 22.8 percent from 2006 to 2009. The smoking rate has dropped from 30.5 percent to 27.3 percent, as has the late pre-term birth rate, down to 9.7 percent from 10.2 percent. (For other states, click on the map above, then click on the state in the larger image.)
The pre-term birth rate was calculated by looking at the percentage of all live births in which the babies had reached 37 weeks gestation or less.
March of Dimes President Dr. Jennifer Howse called the study results positive, "given that for the past 30 years, the rate of preterm birth has been increasing."
"It's not a lot, and the rate is still too high, but the good news is some things are starting to work," she said. (Read more)
Posted by Tara Kaprowy at 2:23 PM