Louisville hospital merger would be just one of dozens across the country, driven by economic and regulatory concerns 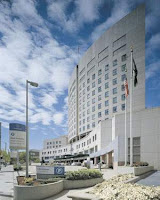 Hospitals are banding together to create organizations better able to withstand the changing tides of the economy and health-care policy. The proposed merger of Louisville's Jewish Hospital & St. Mary's HealthCare, Lexington-based Saint Joseph Health System and University Hospital at the University of Louisville is just one of many examples.

"The small, community hospital is soon to go the way of the dinosaurs," said Angela Mattie, associate professor of health-care management of Connecticut's Quinnipiac University, told Laura Ungar of The Courier-Journal.
Through September, 2011 had seen 71 mergers nationwide involving 132 hospitals worth $6.9 billion, plus another four deals in October. In all of last year, there were 74 mergers involving 126 hospitals and $5.8 billion, Ungar reports.

The poor economy is part of the reason for hospital systems merging because "people don't use hospitals as often; even those with insurance sometimes forego care to avoid co-pays," Ungar reports. In a tight economy, credit is more difficult to obtain, but bigger, richer systems have less trouble. Finances are a major impetus behind the big Louisville merger, with officials at University Hospital and Jewish arguing "if they don't merge they'll lack the money to make improvements going forward, partly because of economic pressures such as rising levels of indigent care," Ungar reports.
Catholic Health Initiatives, which owns the Saint Joseph Health System, plans to invest $320 million "to launch the merged network and strengthen its balance sheet," said CHI spokeswoman Mary Elise Biegert. Of another $300 million that would be generated by operations, two-thirds would be invested in Louisville's academic health center and $100 million would help pay for a switch to electronic health records.
Experts also say big systems have more bargaining power with health insurers, nd the federal health-care reform law means "It makes sense to enlarge a hospital system to capture as many as possible of the 30 million Americans expected to eventually be newly insured under the new law," Ungar writes.
Mergers also allow hospitals to consolidate and save costs, "by having one human resource or finance department instead of three," Ungar reports. (Read more) For another story on what has been termed "merger mania," click here.
Posted by Tara Kaprowy at 9:45 AM