Retailers like Walmart, CVS getting into primary care, eyeing the prize that awaits if health reform takes effect in 2014 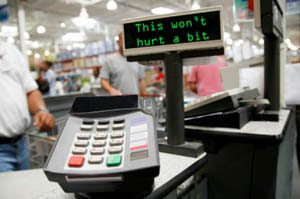 Last week, a document leaked showing Walmart's intention to become the country's largest provider of primary health services, but the company's interest is not unique. Drug retailers like CVS Caremark and Walgreens are eyeing the same prize: "the millions of Americans with costly illnesses such as diabetes and heart disease," reports Julie Appleby of Kaiser Health News. CVS already has 550 retail clinics, the most in the country. Walgreens has also set up programs aimed at diabetic customers, which includes counseling with pharmacists.

The retail industry is looking at ways it can use its clout to save money and offer a primary care infrastructure that experts say will be short by 21,000 doctors by 2015, largely because of the 30 million more people becoming insured by 2014 under the federal health-care reform law. "It's sad that the existing health care establishment has not figured out a way to make primary care affordable and accessible," said Jerry Avorn, a professor of medicine at Harvard University. "We should not be surprised if someone outside of our world comes in and does it for us."
Costs at retail clinics are "roughly 30 percent to 40 percent less than similar care at a doctor's office and 80 percent cheaper than at an emergency room," Appleby reports, referring to a study in the American Journal of Managed Care. Those savings appeal to insurers. Retail clinic use by people with health insurance increased tenfold from 2007 to 2009, with clinics accounting for 7 percent of all medical visits for 11 common acute conditions, the study found. "If these trends continue, health plans will see a dramatic increase in retail clinic utilization ... particularly among young, healthy and higher income patients living close to retail clinics," the study concluded.

Patients like the clinics for the predictability, with costs made clear ahead of time. And employers — who under the new health law could get incentives to provide wellness programs for their employees — may partner with the clinics to provide blood testing, nutrition counseling and diabetes management. However, there are still many unknowns. While the clinics have proved useful for acute care, it remains to be seen how they will deal with complicated issues like diabetes management.

Some states prevent clinics from employing physicians, nurse practitioners or physician assistants. "Other states cap the number of nurses each doctor can oversee," Appleby reports. The vast majority of clinics are staffed not by doctors, but physician assistants and nurse practitioners. A report by the Convenient Care Association shows 95 percent of the clinicians are nurse practitioners. With these practitioners able to provide basic care, part of the fear among doctors is they will be left to treat only the sickest patients and won't be reimbursed accordingly.
Most of the clinics are in the South and Midwest. In January, Merchant Medicine listed 40 retail clinics in Kentucky, with more to open in 2011. The clinics "are more likely to be in areas with lower overall poverty and only 12.5 percent were in medically underserved areas," Appleby reports, though 21 percent of the U.S. population lives in those areas.
The clinics have typically offered vaccinations and simple physical exams and treatment for strep throat and ear infections, but plan to expand their services and enlarge retail's foothold in the medical world. "Think about Toyota; they didn't start off by competing with Cadillac and BMW. They started with cheap little cars but got better and better over time," said Mark Smith, president and CEO of the California Healthcare Foundation. (Read more)
Posted by Tara Kaprowy at 7:05 PM