If Republican governors are agreeing to expand Medicaid after lobbying by hospitals, can Beshear be far behind?

Florida Gov. Rick Scott's surprising announcement that he would use federal health-care reform money to expand the Medicaid program to households earning up to 138 percent of the poverty level "means the dominoes are falling," says Ron Pollack, executive director of Families USA, a consumer group that lobbied for the law. And another domino seems likely to be Democratic Kentucky Gov. Steve Beshear, without involvement by the state legislature.

Beshear has said he will expand Medicaid if Kentucky can afford it, and has mentioned that the state can reserve the right to pull out of the deal in 2017, when it must start paying a small but increasing share of the cost, reaching 10 percent in 2020. Scott used the same qualification.

Pollack told The New York Times that the message sent by seven Republican governors' acceptance of the deal is  “Even though I may not have supported and even strongly opposed the Affordable Care Act, it would be harmful to the citizens of my state if I didn’t opt into taking these very substantial federal dollars to help people who truly need it.” The GOP governors (of states outlined in Times map below) have said they will expand the program partly to protect rural hospitals and the poor. 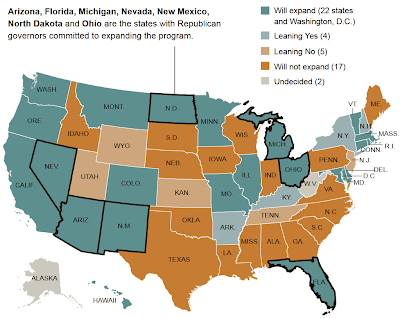 "The change of heart for some Republican governors has come after vigorous lobbying by health industry players, particularly hospitals," the Times notes. "Hospital associations around the country signed off on Medicaid cuts under the health care law on the assumption that their losses would be more than offset by new paying customers, including many insured by Medicaid. . . . Every few days, state hospital associations and advocates for poor people issue reports asserting that the economic benefits of expanding Medicaid would outweigh the costs." (Read more)

Kentucky Hospital Association President Michael Rust said the trade group is for "universal coverage" by whatever means but is not lobbying Beshear for Medicaid expansion. "We assume he is" going to expand it, Rust said in an interview today. He said the association has not taken a position on bills that would require legislative approval of expansion and the health-insurance exchange being set up under the reform law. The legislation, Senate Bill 39 and SB40, passed the Republican-controlled Senate on party-line votes today, and are expected to die in the Democratic-majority House.

Kentucky Health News is an independent news service of the Institute for Rural Journalism and Community Issues at the University of Kentucky, with support from the Foundation for a Healthy Kentucky.
Posted by Al Cross at 10:29 AM