By more than 2-1, Kentuckians support a statewide ban on smoking in most public places, including restaurants and bars 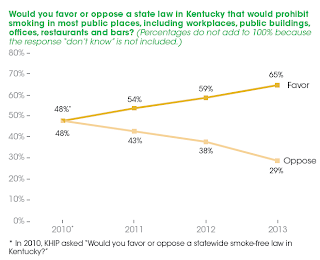 By more than 2 to 1, the heaviest margin ever, Kentucky adults favor a state law to ban smoking in most public places, including restaurants and bars, according to the latest public poll on the issue.

A statewide smoking ban was favored by 65 percent and opposed by 29 percent in the latest Kentucky Health Issues Poll, conducted Oct. 25 through Nov. 26 by the Institute for Policy Research at the University of Cincinnati. In fall 2011, 59 percent favored it and 38 percent opposed it. The polls' error margin is plus or mimus 2.3 percenatge points

The largest shifts in opinion occurred among Democrats and independents, and in Western Kentucky, Northern Kentucky and the Lexington area. "It's not a partisan issue. It's become a health issue," said Susan Zepeda, president and CEO of the Foundation for a Healthy Kentucky, which sponsored the poll with Interact for Health, formerly the Health Foundation of Greater Cincinnati.

In the latest poll, support for a smoking ban jumped 10 points among Democrats, to 69 percent, while Republicans stayed steady at 64 percent. But the larger error margins for those smaller samples mean that there is no statistical difference between the parties. Among independents, 57 percent supported the proposed law, up from 44 percent the year before. 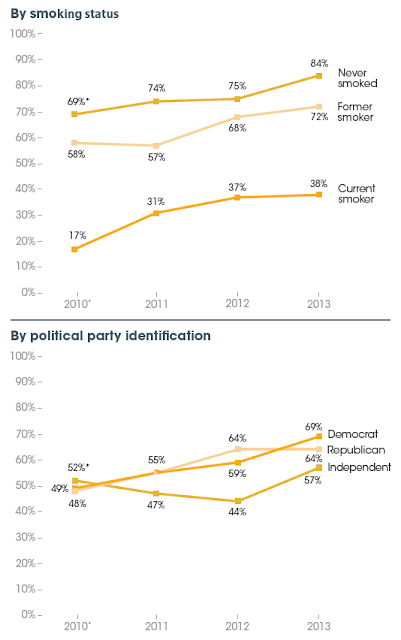 Such shifts might indicate that a smoking ban could get farther in the General Assembly than in the past two sessions, when it got out of a House committee but did not receive a floor vote. So could the geographic shifts in opinion, especially in Western Kentucky, where local smoking bans are less common than in the state's more heavily populated areas. The legislative session begins Tuesday, Jan. 7.

In the 42 counties the poll defines as Western Kentucky, which had been the region least supportive of a ban, the poll found that 65 percent of adults now favor it, while only 30 percent oppose it. A year earlier, the split was 53-44, and the error margin of plus or minus 5.48 percentage points for that small sample made it a statistical tie.

Similar shifts were seen in Northern Kentucky, where 66 percent now favor a statewide ban, and in Lexington, where it is backed by 71 percent, more than in any other geographic area. Lexington has had a local ban for 10 years, and the University of Kentucky bans smoking anywhere on campus.

The region least supportive of a ban is now Appalachian Kentucky, but even there, 62 percent favor it while 34 percent oppose it. The region showed the smallest change in opinion from the year before, when the split was 58-40. Until the latest poll, Appalachian opinion on the issue had been virtually the same as statewide opinion. The poll defines Appalachian Kentucky as the 46 counties in the Big Sandy, Buffalo Trace, Cumberland Valley, Fivco, Gateway, Kentucky River and Lake Cumberland area development districts.

The Appalachian results may reflect the fact that the region is where residents are most likely to be smokers. The poll found little if any change among smokers' support for a ban, rising one point to 38 percent. Among former smokers, it rose to 72 percent; among those who said they had never smoked, there was a 9-point increase, to 84 percent. One-third of those surveyed said they were smokers, slightly higher than more comprehensive surveys generally show.

Zepeda, who regularly tracks health issues and discussions of them, said she and the foundation staff were surprised at the large overall increase in support for the proposed law. She said it might have been cause in part by an increased "understanding about the inability to pick where you work," especially in a state where unemployment is still above 8 percent. She said someone who opens a restaurant door and smells cigarette smoke can go to another restaurant much more easily than workers in smoky workplaces can find a smoke-free place to work.

The foundation noted in its press release that the federal Centers for Disease Control and Prevention said in 2006 that no level of secondhand smoke is safe, and recommended that all indoor smoking be eliminated.

While the foundation does not lobby and generally doesn't express opinions on pending legislation, Zepeda said, "We do feel the data are compelling, that not smoking is better for Kentuckians, and not breathing other people's smoke is better for Kentuckians. . . . All told, it would be good for the health of Kentucky if there were a statewide smoke-free law or regulation."

Kentucky leads the nation in percentage of adults and children who smoke, and in lung cancer and deaths from it. Asked if cigarettes are the No. 1 factor in the state's poor health status, Zepeda said, "It is a strong contributing factor. I think nutrition and [lack of] physical activity are up there, as well."

Business owners who oppose local smoking ordinances or health-board regulations, because they fear losing customers to adjoining areas without such bans, might prefer a statewide law, Zepeda said. The Kentucky Chamber of Commerce favors it, mainly as a way to reduce employers' health costs.

Zepeda said that as federal health reform uses tax dollars to bring health coverage to more people, more taxpayers may see the benefits of measures to discourage smoking. Kentucky is among the states expanding the Medicaid program to households with incomes up to 138 percent of the federal poverty line; the federal government will pay the entire cost of that until 2017, when the state will start paying increasing shares, topping out at 10 percent in 2020.

Here's an interview between Zepeda and Ryan Alessi of cn|2's "Pure Politics:"
Posted by Al Cross at 4:04 PM