Danville is latest Ky. community to ban indoor use of e-cigarettes, following new law that classifies them as tobacco product

The Danville City Commission has approved an ordinance that bans the use of e-cigs in enclosed places, placing the same restrictions on them that already exist on traditional tobacco cigarettes, though the health risk of e-cigs has not yet been determined, Todd Kleffman reports for The Advocate-Messenger. 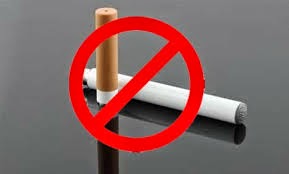 Kleffman notes that Danville is among a few Kentucky communities leading the way on placing restrictions on e-cigs, which are battery-powered devices that emit vaporized nicotine, but not tobacco.

"Bardstown, Manchester and Madison County have placed an outright ban on public use of e-cigs, while Kenton County prohibits their use in the workplace, and Glasgow bans them in bars and restaurants, according to attorney Chris Johnson of the Kentucky League of Cities," Kleffman writes.

E-cigs have become increasingly popular as an alternative to smoking, and because the amount of nicotine can be adjusted in the vapor liquid, many use it as a means to quit smoking, although this claim has not been proven.

“Generally, it’s people who are trying to quit smoking or are looking for a cheaper, healthier, less offensive alternative,” Blayne Hogue, operator of Vapor Visions in Danville, told Kleffman. “With the younger crowd it has appeal because of the taste and because it’s kind of the new thing.”

Speaking to the concern that vaporizing products with a "candy store array of flavors carrying names like Skittles, Pluto, Mother’s Milk and John Wayne" is designed to appeal to an underage crowd, Eric Griffiths, proprietor of the e-cig store Juice Box, asked,  “Why is that we have to be marketing to kids because it has flavors? Just because it’s an adult product doesn’t mean it has to taste bad.”

The U.S. Food and Drug Administration announced last month that it will begin regulating e-cigs in the future, Kleffman notes, and the Kentucky General Assembly passed a law this year that puts
vapor products in the same class as tobacco cigarettes, prohibiting their sale to those under 18.

The state law, not complaints from local business owners or residents, is what prompted the Danville City Commission to enact its own ordinance banning e-cigs in enclosed public places, City Manager Ron Scott told Kleffman.

“The state now classifies them as a tobacco product. What makes them different? By our ordinance, there is no distinction,” Scott said to Kleffman. “You can’t have it both ways. We had to clarify it for our businesses as to where they can be used. Vapor products contain nicotine, and from a public health point of view, there is an unknown amount of nicotine in the exhaled vapor that could affect others, like second-hand smoke. . . . Do you err on the side of caution, or do you just disregard the potential public health risks?"

The commission vote was 3-2, with Mayor Bernie Hunstad and Commissioner Kevin Caudill voting against the ban after two citizens argued that the prohibition was premature because no reliable research has proven that the devices create a public health concern.

Posted by Melissa Patrick at 10:44 PM