Two-thirds of Kentuckians support a statewide ban on smoking in most public places; Stumbo says it's time for a House floor vote

Kentuckians have remained steady in their support for a comprehensive statewide smoking ban with two-thirds supporting it, according to the latest Kentucky Health Issues Poll. Hours after the poll was released, state House Speaker Greg Stumbo said it is time for a House floor vote on the proposal. 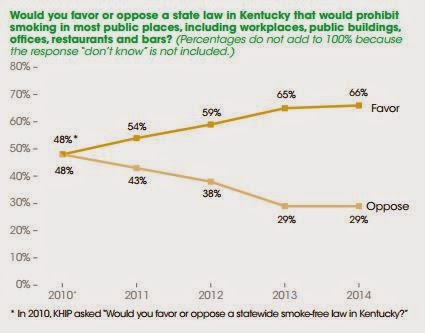 The poll was conducted by the Institute for Policy Research at the University of Cincinnati for the Foundation for a Healthy Kentucky and Interact for Health, formerly the Health Foundation of Greater Cincinnati. 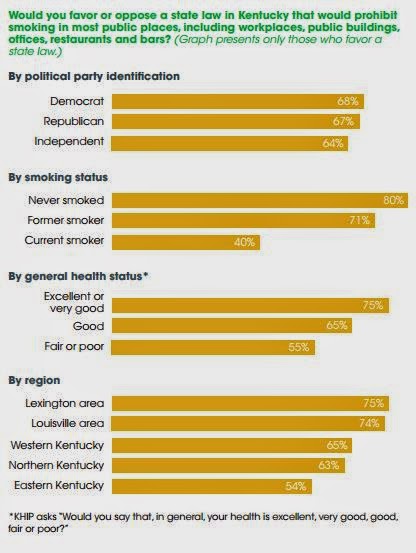 Lexington (75 percent) and Louisville (74 percent) showed the highest levels of support for the ban. While most of those in Appalachian area-development districts support it, support in Appalachian Kentucky declined to 54 percent in 2014 from 72 percent in 2013. That was offset by gains in other areas. The error margin for this smaller sample is plus or minus 5.4 percentage points.

Twenty-six states and the District of Columbia have comprehensive smoke-free laws. Kentucky has several reasons to pass one. It leads the nation in smoking as well as lung cancer and deaths from it. Second-hand smoke is estimated to kill 950 Kentuckians a year, and research indicates that it increases the risk of heart and lung disease by 20 to 30 percent.

A smoking ban came closest to a floor vote in the full House last year, but has never gotten out of committee in the Senate. House Speaker Greg Stumbo said on KET's "Kentucky Tonight" Monday that it is time for a floor vote, the best sign yet that it will get one. But Senate President Robert Stivers maintained that smoking bans should be done locally, not statewide.

After four days this week devoted to organization and ethics training, the legislature will recess until early February. The session of 30 legislative days must end by March 31.
Posted by Melissa Patrick at 8:27 PM