'Snapshot' from continuing study of health reform in Ky. shows steep drop in amount of uncompensated care at hospitals

A continuing study of federal health reform's impact in Kentucky has found a big drop in uncompensated care at hospitals and broader insurance coverage than in adjoining states.

The Foundation for a Healthy Kentucky is paying the State Health Access Data Assistance Center at the University of Minnesota more than $280,000 to study how the Patient Protection and Affordable Care Act is affecting Kentuckians.

Under the reform law, Kentucky expanded eligibility for the federal-state Medicaid program to people in households with incomes up to 138 percent of the federal poverty level. Hospitals welcomed the expansion, because it brought more people who hadn't been getting care into the system, but say it has also been challenging because Medicaid pays about 82 percent of their cost of providing care.

State officials say, and hospitals acknowledge, that hospitals now have much less uncompensated care, or bad debts, because more people have coverage. The study's first "snapshot" of the law's impacts puts numbers on that, reporting that uncompensated care dropped preciptously when the expansion took effect in January 2014, falling to $83 million in the last quarter of the year from a high of $288 million about a year earlier. 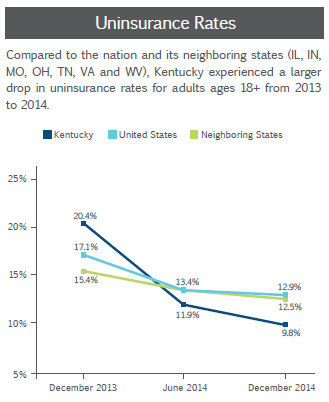 Medicaid expansion has also helped reduce the percentage of people without health coverage more in Kentucky than in adjoining states. In December 2014, 9.8 percent of Kentuckians reported having no health coverage, well under the adjoining-state average of 12.5 percent and the national average of 12.9 percent. The figures come from The Gallup Organization, which reported last month that the Kentucky figure had fallen to 9 percent. The study did not mention the more recent figure; it was limited to impacts through the first quarter of 2015.

The study reported that during the quarter, Medicaid funded 9,314 breast cancer screenings, 4,586 hepatitis C screenings, and thousands of other preventive services," a foundation news release said. There were 5,675 cases of substance-abuse treatment, which is newly eligible for Medicaid, during the quarter.

The study also noted that Medicaid enrollment remains concentrated in Eastern Kentucky, with 32 percent of the total; greater Louisville has 19 percent. For the study presentation in graphics, click here.

Next spring, the researchers will conduct a telephone survey about the impacts of the law. “This multiyear study from a nationally known independent source will provide valuable data to inform health policy decisions,” Susan Zepeda, president and CEO of the foundation, said in the release. She told Deborah Yetter of The Courier-Journal, "We're really making a difference in the lives of Kentuckians. More people will have those health insurance cards and have access to timely health care, and that's quite a positive story."
Posted by Melissa Patrick at 10:21 AM