Kentucky is in the bottom 10 states for cancer-preventing HPV vaccination, probably because it has to do with sex

The human papillomavirus vaccination is nearly 100 percent effective in preventing precancers and noninvasive cervical cancers caused by two strains of the virus, but most parents in Kentucky and the nation are still not getting their adolescents vaccinated.

HPV is a group of more than 150 related viruses, which together are the most common sexually transmitted infections in the U.S.

An estimated 79 million Americans are infected with HPV and about 14 million more become infected each year, according to the federal Centers for Disease Control and Prevention. And while most HPV strains cause no symptoms and go away on their own, 10 percent of HPV infections lead to cancers of the cervix, vagina, vulva, penis, anus and throat.

The HPV vaccination was approved by the federal government 10 years ago and is recommended for all adolescent girls and boys 11 and 12 years old. Nationwide, fewer than half of girls and only one-fifth of boys are getting immunized.

The vaccine can be given to females as old as 26 and males as old as 21, but early vaccination is important. The vaccine is less effective if a person has already been exposed to the virus, because it works to prevent HPV before exposure, and not to treat existing HPV infections or associated diseases. Vaccinating adolescents better protects them before they are likely to become sexually active and exposed to the virus.

And therein lies the key reason health experts say most parents don't get their children vaccinated and health providers are hesitant to push this potentially life-saving vaccine: It has to do with sex, Michael Ollove reports for Stateline.

Opponents of the vaccine being given to adolescents argue that it encourages them to engage in sex because it removes the fear of contracting HPV, but at least one study shows no increase in sexual activity in girls who have been immunized, Ollove reports.

Health officials often lament that the vaccine wasn't originally sold to the public as an anti-cancer vaccine rather than one to prevent a sexually transmitted disease, Ollove reports.

“It should have been pushed out as an anti-cancer drug,”Walt Orenstein, a professor of medicine at Emory University and the former director of the National Immunization Program at the CDC, told Ollove. “People didn’t understand why their children needed this drug when they were still years away from being sexually active.”

Ollove notes other reasons for low vaccination rates: Health-care providers often don't stress the importance of the vaccine; many don't promote the vaccine because they aren't comfortable talking about sex with their young patients or their parents; and many providers feel the vaccine is not urgent because most adolescents in middle school are not sexually active. Another barrier is that the the HPV vaccine requires three inoculations over several months; the CDC shows a dramatic drop-off between the first and last doses.

Citing Noel Brewer, who does research on immunizations at the University of North Carolina and has studied parental and provider attitudes toward HPV, Ollove writes, "Contrary to what doctors may believe, parents are interested in the vaccine and a strong recommendation from a physician correlates highly with youngsters getting the full course of vaccinations."

Ollove notes that mandatory HPV immunizations have not proven to be successful. “Mandates are a last resort after you’ve built consensus that they are a good thing to do,” Orenstein told him. 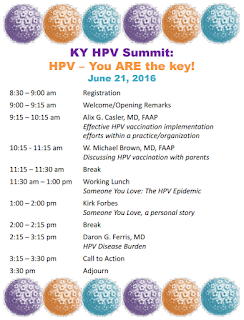 Health policy researchers say that "reminder and recall" notices are the best way to keep patients up to date on vaccinations, and yet this is not a common practice, Ollove reports.

Insurance will cover the cost of the HPV vaccine and the Vaccines for Children Program will cover the vaccine at no cost for children who don't have insurance and are younger than 19. Call 800-232-4636 for more details.

The Kentucky Rural Health Association in collaboration with the Kentucky Immunization Program and the state Division of Women's Health will be hosting Kentucky's HPV Summit, "HPV: You ARE the Key!," at the Embassy Suites in Lexington June 21. The cost is $40 until June 1 and $55 afterward. Click here to register.

Posted by Melissa Patrick at 12:16 PM