Study: Ky. kids have more access to oral health care, but still have poor outcomes; 1/2 in Appalachia have untreated cavities

The oral health of Kentucky's school children is getting worse, even though access to oral health care is better now than it was 15 years ago, says a study by Delta Dental of Kentucky and Kentucky Youth Advocates.

The report, "Making Smiles Happen: 2016 Oral Health Study of Kentucky's Youth," is the first oral health study of Kentucky's children since 2001, and was presented to Kentucky lawmakers Wednesday at the Oct. 19 Interim Joint Committee on Health and Welfare.

"What leaps out in the report are two big issues," said Dr. Terry Brooks, executive director of Kentucky Youth Advocates. "One is the paradox that more kids have coverage and yet outcomes are worse and the second is that we have factors that kids can't control -- where they live, the color of their skin, how much money their parents make -- and those are real determinants on the state of kids mouths. None of those are easily solved, but they are challenges that we have to tackle."

Researchers worked with the University of Louisville's School of Dentistry to analyze the mouths of 3rd and 6th graders across the state. The study also asked parents about family oral health history, resulting in the collection of data for over 2,000 students.

The report had four key findings.

First, it found that more 3rd and 6th graders are in need of early or urgent dental care since 2001, rising to 49 percent in 2016 from 32 percent in 2001. It noted that Hispanic or Latino students are "significantly less likely" to have dental insurance than their peers and that children who live in the Appalachian region have the greatest need for urgent dental care, 20 percent compared to 8 percent overall.

Another key finding was that two out of five 3rd and 6th graders have untreated cavities. This measure was also "significantly greater" in the Appalachian region, where more than half of the children in the study had untreated cavities.

"We know in a very pragmatic way that a person with a toothache is probably not paying attention to their multiplication tables at school, so oral health is a significant issue for children in Kentucky," Brooks said.

And despite a 14 percent increase in the number of 3rd and 6th graders with dental sealants on at least one permanent molar between 2001 and 2016, more than 50 percent of the children in the study didn't have them. African-American children in the study were the most likely to not have any sealants.

It also found the 3rd and 6th graders eligible for free or reduced lunch (more than half of students in the study) were more likely to have recently experienced a toothache, have visited a dentist more than a year ago, have untreated decay or be in need of urgent dental care.

The report points out that "there was no significant differences in the presence of tooth decay by race/ethnicity, giving further evidence that socioeconomic status is in the strongest determinant of a child's oral health status."

Delta Dental President Clifford Maesaka said the report recommends the data be used to make a comprehensive statewide plan and that regional coalitions should be formed to find local solutions. The report also recommends school-based sealant programs, oral health literacy campaigns and points out that the state should continue to gather data.

"We need a plan," Maesaka said. "If we don't recognize the need for preventive and diagnostic care in our kids, we are probably not going to make it a priority." He added, "We need our parents, our school administrators, our legislators, everybody to recognize that the mouth is part of the body and things that go on in the mouth have an effect on the rest of the body and vice-versa." If the message can be conveyed, "We will have a better chance of succeeding."
Posted by Traci Thomas at 9:53 AM

As cases surge in southeastern Ky., public-health and local officials join forces to combat it and tamp down the politics 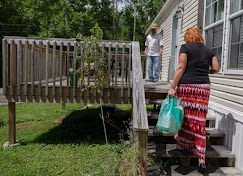