More than half of Kentuckians have a gun in the house,15% are loaded and unlocked; among those with children, 12% 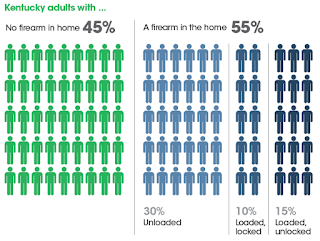 More than half of Kentucky adults have a firearm in the home and 15 percent of those guns are loaded and unlocked, according to a the latest Kentucky Health Issues Poll.

"Gun safety is a public health issue," said Ben Chandler, president and CEO of the Foundation for a Healthy Kentucky, a co-sponsor of the poll. "Whether it's a toddler who stumbles across a loaded gun or a teenager showing off to a friend, accidents happen every day. We can prevent these tragedies by keeping guns and bullets in separate, secure places."

The poll, taken Sept. 11 through Oct. 19, found that 55 percent of Kentucky adults had a firearm in or around the home, up from 45 percent in 2011, the last time the poll asked this question.

The American Academy of Pediatrics recommends not keeping a firearm in a home with a child, but if you, it says the firearm should be unloaded and securely locked in storage, away from the ammunition.

The poll was funded by the foundation and Cincinnati-based Interact for Health. It surveyed a random sample of 1,580 Kentucky adults via landlines and cell phones, and has an error margin of plus or minus 2.5 percentage points.
Posted by Melissa Patrick at 11:19 PM