Kentucky's food insecurity declines slightly, but remains high in southeast; in 3 counties, rate among children is above 30 percent 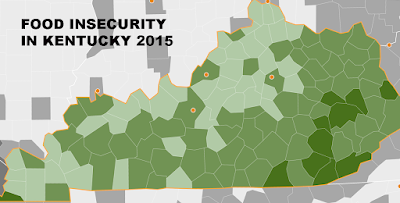 The percentage of Kentuckians with an insecure food supply has declined slightly but remains ahead of the national average, with several counties well above the average, according to the latest measurement by Feeding America, which calls itself the nation's largest domestic hunger-relief organization.

The latest calculations, for 2015, showed Kentucky's rate at 16 percent, down slightly from 17 percent in 2014, but still ahead of the national average of 14 percent. The rates ranged from 8 percent in Oldham County to 23 percent in Wolfe County.

The measurements use data from the census, the Bureau of Labor Statistics, food-price data and analysis from Nielsen, and information from the U.S. Department of Agriculture, which defines food insecurity as "lack of access, at times, to enough food for an active, healthy life for all household members and limited or uncertain availability of nutritionally adequate foods. Food-insecure households are not necessarily food insecure all the time. Food insecurity may reflect a household’s need to make trade-offs between important basic needs, such as housing or medical bills, and purchasing nutritionally adequate foods."

Southeastern Kentucky's Fifth District has the highest food insecurity rate among the state’s six congressional districts, at 19.2 percent, said a news release from the Kentucky Association of Food Banks. "Children are at a higher risk of food insecurity; 20 percent of Kentucky’s children are food-insecure," the release says. "Three Kentucky counties have childhood food-insecurity rates of 30 percent or higher: Wolfe (32.4 percent); Magoffin (30.7 percent); and Clay (30.2 percent). This represents a decrease from the previous year, when 11 Kentucky counties had childhood food-insecurity rates of 30 percent or higher."

More than a fourth of Kentuckians (27.3 percent) in food-insecure households have incomes above 185 percent of the poverty line, "making them likely ineligible for most federal nutrition assistance programs," the release says.

“Though far too many Kentuckians continue to struggle to put healthful food on the table, we are encouraged by the movement in the right direction on hunger in Kentucky,” said Tamara Sandberg, executive director of the food-bank association. “Kentucky is a leader in the nation for our strong public-private partnerships, such as the Kentucky Department of Agriculture Commissioner Ryan Quarles’s hunger initiative and the Kentucky Legal Food Frenzy sponsored by Attorney General Andy Beshear. We are committed to implementing creative solutions to the problem of hunger until the day when no Kentuckian has to go to bed hungry.”