Whether it's the misuse of prescription pain relievers, heroin or methamphetamine, the latest Kentucky Health Issues Poll findings indicate that many Kentuckians have a drug problem.

The poll, conducted Oct. 24 to Dec. 2, found that nearly one in four Kentucky adults, or 24 percent, said they knew someone who had experienced problems as a result of prescription pain relievers. That number has remained largely the same since 2013, but it indicates the depth of the problem.

"Misuse of opioids such as OxyContin, Vicodin, Percocet and codeine remains a critical public health and safety issue for Kentucky," Ben Chandler, president and CEO of the Foundation for a Healthy Kentucky, which co-sponsors the poll, said in a news release. "Not only are we losing more than 1,600 lives a year to overdoses, we are facing incredible losses in quality of life, workplace productivity, and business competitiveness." 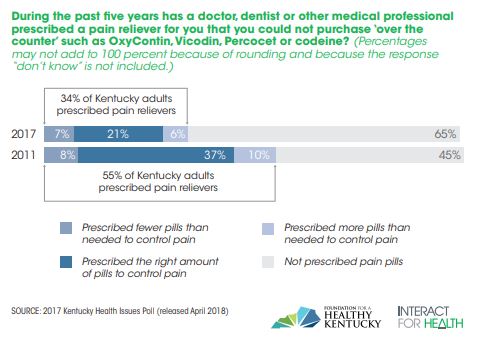 The good news: Kentuckians said they are being prescribed pain relievers less often. In 2011, the poll found that 55 percent of Kentucky adults said they had been prescribed a pain reliever in the past five years; in the latest poll, the number dropped to 34 percent.

"Perhaps all of the education that's being done about the dangers of over-prescribing narcotic pain relievers is starting to make a difference, both in the number of people getting prescriptions and the amount of the pain medication they receive," Chandler said.

The poll also found regional differences in prescribing. The highest percentage of Kentucky adults who said they had been prescribed a pain reliever in the past five years was in the Louisville area (41 percent) and Northern Kentucky (40 percent). In was 37 percent and 36 percent in Lexington and Western Kentucky, respectively. The lowest share, 26 percent, was in Eastern Kentucky. That is the region where problems with drug addiction and overdoses are greatest, so the numbers could indicate that users are using illegal drugs or getting prescription medicines from illegal sources.

The poll found that 16 percent of Kentucky adults said they knew someone who had problems as a result of using methamphetamine or heroin. Both numbers were unchanged from the prior poll.

Since 2013, Kentucky adults reporting they knew someone with a meth problem increased in Louisville (from 6 percent in 2013 to 16 percent in 2017) and Northern Kentucky (11 percent to 17 percent) and declined in the Lexington area (19 percent to 13 percent). The numbers remained about the same in Eastern and Western Kentucky.

"This poll is yet another piece of evidence that Kentucky's focus on resolving the drug abuse crisis must continue," Chandler said. "And it must involve multiple sectors of our society working together to engage all individuals struggling with addiction."

The news release about the poll notes that a National Vital Statistics Report shows meth use may be rising to problematic levels similar to heroin use; the National Institute on Drug Abuse reports that Kentucky had the fifth highest death rate due to drug overdose in 2016; and a CDC report found opioids, including prescription drugs, are the most common cause of overdose deaths.

Kentucky passed a law last year that generally limits painkiller prescriptions to a three-day supply if prescribed for acute pain, which lines up with the Centers for Disease Control and Prevention's guidelines for prescribing opioids. The limit does not apply to prescriptions for chronic pain.

This year the legislature passed a law to require pharmacists to tell patients how to safely dispose of unused opioids and other controlled substances, and either provide or offer to sell them a product designed to neutralize the drugs for disposal, or provide on-site disposal. Nearly 80 percent of Americans using heroin, including those in treatment, reported misusing prescription opioids first, according to the National Institute on Drug Abuse.

The poll was funded by the foundation and Interact for Health, a Cincinnati-area foundation. It surveyed a random sample of 1,692 Kentucky adults via landlines and cell phone. The poll's margin of error for each statewide result is plus or minus 2.4 percentage points.
Posted by Melissa Patrick at 5:16 PM