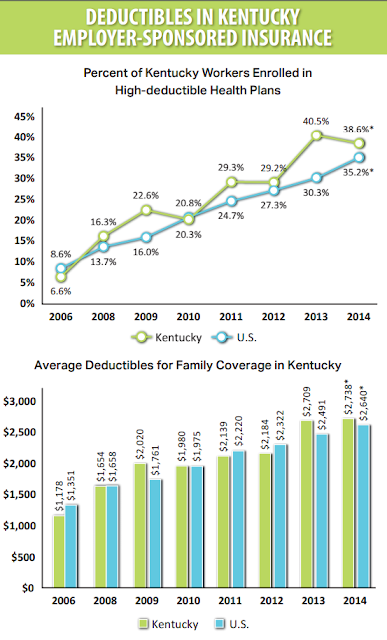 Six times as many Kentucky workers were enrolled in high-deductible health insurance plans in 2014 as in 2006, reflecting a national trend, says a report for the Foundation for a Healthy Kentucky. As a result, the average amount they had to pay before their insurance kicked in more than doubled, from $1,178 in 2006 to $2,738 in 2014.

Most of the 93,666 people enrolled in the Kynect health-insurance exchange, where premiums are federally subsidized, chose high-deductible plans for this year.

"Employers and consumers often choose high-deductible health plans in return for lower monthly premiums," said Susan Zepeda, president and CEO of the foundation. "Research shows that these plans lead to decreased health-care spending as consumers who have to pay up front for care become more conscious of costs. But consumers on high-deductible plans also tend to use fewer preventive services, such as vaccinations and cancer screenings, that save money -- and lives -- in the long run. And these plans can make it more difficult for Kentuckians with low incomes or chronic conditions to pay their medical bills, leading them to delay or skip essential health care."

The report was created by the State Health Access Data Assistance Center at the University of Minnesota as part of a 34-month study of the impacts of federal health reform in Kentucky.
Posted by Al Cross at 3:57 PM