Ky. uninsured rate has dropped significantly under Obamacare, but many struggle with maintaining stable coverage

Many more Kentuckians have health insurance because of the Patient Protection and Affordable Care Act, but more than one in five Kentucky adults under 65 say they still don't have stable coverage, according to the latest Kentucky Health Issues Poll. 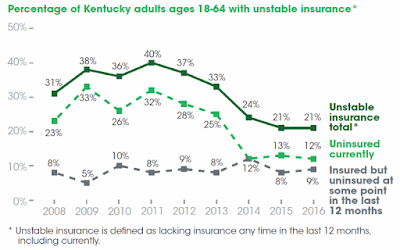 The Sept. 11-Oct. 19 survey found that 12 percent of Kentuckians aged 18 to 64 were uninsured. Another 9 percent reported they had health insurance, but had been uninsured at some point in the past 12 months.

"Health insurance is still an iffy proposition for more than one in five Kentucky adults who are 18 to 64," said Ben Chandler, president and CEO of the Foundation for a Healthy Kentucky, which co-sponsors the poll. "While the ACA has ensured coverage for over 355,000 Kentuckians from 2014 through 2015, there's still a significant number of Kentucky adults who can't rely on getting routine preventive and wellness care, let alone effective treatment for chronic conditions, because they can't rely on insurance to cover the cost."

The poll also found that the number of Kentuckians 18 to 64 on public insurance has dropped, while the number with employer-sponsored health insurance was about the same as last year.

Public insurance, such as Medicaid or military benefits, was reported by 29 percent of Kentucky adults under 65, down from 35 percent in 2015. Forty-five percent of Kentucky adults said they had employer-sponsored coverage in 2016, compared to 41 percent in 2015. The latter difference is not statistically significant, because the poll's error margin is plus or minus 2.5 percentage points, but chances are that fewer Kentuckians had such coverage. 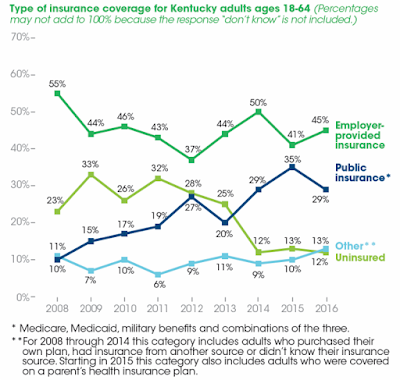 The uninsured rate for Kentuckians 18 to 64 has dropped by more than half since the 2014 implementation of the ACA. The report notes that 97 percent of all Kentuckians 65 and older have health insurance.

Among Kentuckians aged 18 to 26 who reported having health insurance, 24 percent said they were covered on a parental plan, made possible by the ACA.

Chandler said, "As the Commonwealth moves forward to transform Medicaid, the foundation is working to help policymakers understand who has health insurance coverage and who doesn't. KHIP is one piece of the foundation's ongoing work to help sustain the gains Kentucky has made while identifying gaps we still need to fill."

The poll was conducted for the foundation and Interact for Health, a Cincinnati-area foundation, by the Institute for Policy Research at the University of Cincinnati. It interviewed a random sample of 1,580 adults on both landlines and cell phones.
Posted by Melissa Patrick at 7:40 PM