As hepatitis A outbreak continues in Kentucky, health officials say vaccine is best way to protect yourself; and wash those hands!

Since state officials declared an outbreak of hepatitis A in November, Kentucky has had 577 confirmed cases of it. That's almost 30 times the state's average of about 20 cases a year, and five of those 577 people have died from the liver disease.

The most common prescription for preventing hepatitis is hand washing, but the absolute best way to avoid the highly contagious disease is vaccination, which requires two shots, six months apart. 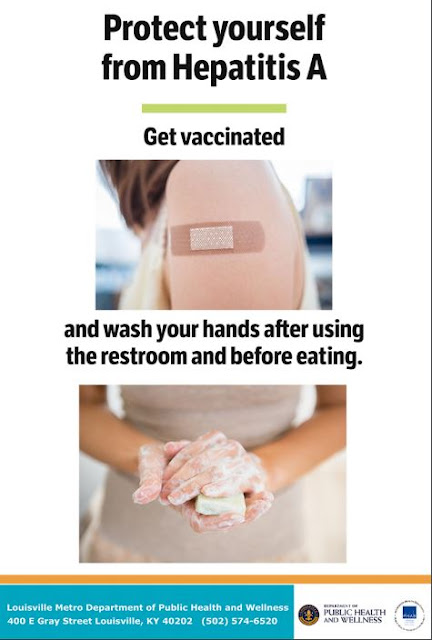 State health officials have advised anyone living in Jefferson, Bullitt, Hardin, Greenup, Carter and Boyd counties, where the outbreak has been concentrated, to get a vaccination.

Officials also advise shots for anyone at high risk for getting the disease, including people who use illegal drugs, people who are homeless or have unstable housing, men who have sex with men, people recently in jail or prison and people with underlying liver disease.

Boyd County residents have responded well to the call, Erin Crace, nurse supervisor at the Ashland-Boyd County Health Department, told Kentucky Health News in a telephone interview. She said the agency vaccinated more than 100 patients a day in mid-April, and the number has dwindled to about 10 to 15 per day.

The department has also reached out to food-service workers to get them vaccinated. As of May 15, six Boyd County food workers have been diagnosed with the disease, the Lexington Herald-Leader reports.


Hepatitis A is found in the feces of people with the disease and is most frequently transmitted by eating or drinking something that has been contaminated with fecal matter -- typically because the food or beverage has been handled by someone with the virus who hasn't properly washed their hands after going to the toilet or changing a diaper. It can also be spread when someone with the virus shares a cigarette, drink or towel, or through sex, drinking contaminated water, and illicit drug use.

So far, most of the state's cases have been among the homeless and drug users, according to the Kentucky Department for Public Health.

A person can get the hepatitis A vaccine in a number of places, including health departments, pharmacies and primary-care providers, but Crace recommends calling first to make sure they have the vaccine in stock before you go.

Because of rules for storing and handling the vaccine, which expires, many primary-care providers, especially in low-risk counties, don't always have the vaccine on hand, and pharmacies might be more likely to have it, Crace said.

Crace said the Ashland-Boyd County department is able to vaccinate children and most people with insurance as well as those who are uninsured or under-insured. It can also offer the vaccine for a cash price. It offers a walk-in clinic between 8 a.m. and 9 a.m., and appointments as available for the rest of the day. It is open Monday through Friday.

A new state regulation requires students to have had the two-dose hepatitis A vaccine by the first day of school, but Crace said the department hasn't vaccinated many children recently, because many of them have already received it; it is offered at 12 months of age and older.

The most common symptoms of hepatitis A are fatigue, low-grade fever, loss of appetite, joint pain, sudden nausea and vomiting, yellow eyes or skin, abdominal pain, pale stools and dark urine, according to the Centers for Disease Control and Prevention. A person with the virus is contagious for up to two weeks before showing symptoms. Symptoms usually last less than two months, but 10 percent to 15 percent of victims remain sick for up to six months.
Posted by Melissa Patrick at 1:24 PM