It's well documented that people in Appalachia die sooner than other Americans, and are more likely to die from smoking-related diseases. It doesn't have to stay that way; a new report offers a detailed list of strategies and policies proven to decrease smoking, the cause of many premature deaths. 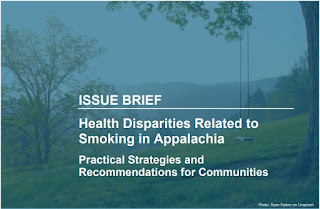 The report was created by Appalachian Regional Commission, the Foundation for a Healthy Kentucky and the Robert Wood Johnson Foundation.

The report notes that in 2014, about 20% of Appalachian adults were smokers, compared to 16% of adults elsewhere in the U.S. Those rates were highest, 25%, in Central Appalachia, the subregion of the ARC service area that includes all of Kentucky's Appalachian counties.

The report adds that smoking is a key factor in deaths from heart disease, cancer and chronic lower-respiratory disease, which are three of the four leading causes of death in the U.S., and that these diseases occur more frequently in Appalachia than in the rest of the country.

As a way to decrease smoking-related deaths, the report recommends four approaches to reduce smoking in the region: youth prevention, increased access to tobacco cessation, strong anti-tobacco campaigns and policies that decrease exposure to second-hand smoke.

"Here is a fresh set of evidence, practical advice, and local examples of the tactics and tools Appalachian communities have used to reduce tobacco use and improve health," Ben Chandler, president and CEO of the foundation, said in a news release. "Some of Appalachia's most glaring health disparities are found in the central region that includes Kentucky and West Virginia, so the approaches can have an outsized benefit here."

Before settling on any of these approaches, the report encourages communities do a "community needs assessment" to best determine which strategies their residents are willing to undertake. The report offers tips and links on how to do such an assessment; recommendations for funders; and links to state- and county-level data on a range of tobacco and health related topics.

The report offers several community-based strategies to decrease youth smoking, which is important because 90% of adults report they started using tobacco products when they were teens.

The General Assembly recently passed a law to ban the use of all tobacco products in all Kentucky public schools and events. It will go into effect July 1, 2020 and gives school boards three years to opt out.

Last fall's Kentucky Health Issues Poll found that 66% of Kentucky adults supported such a law and 30% opposed it. Bills to raise the age to buy tobacco products from 18 to 21 have been introduced for several years, but haven't gained much traction.

As for raising the cigarette tax, it's not likely that Kentucky's lawmakers will do that again anytime soon since they increased it by 50 cents to $1.10 per pack in 2018, which at 83 percent was the largest increase in the state's history. 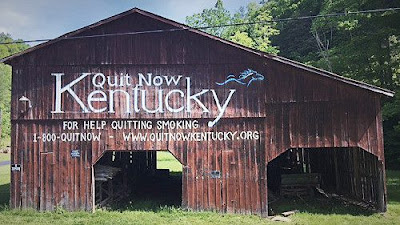 The report also advises Appalachian communities to increase their access to tobacco-cessation products. One way it says to do this is to partner with work and faith-based organizations. As an example, the report points to the Faith Moves Mountains program, which provided cessation treatment to 590 smokers across 26 rural churches in Appalachian Kentucky. The state has a quitline (1-800-QUIT-NOW).

Further, the report says Kentucky serves as an example of how states can pass laws to reduce out-of-pocket costs for cessation treatment, pointing to Senate Bill 89, which requires all insurance policies sold in Kentucky, including Medicaid, to cover all tobacco cessation services recommended by the U. S. Preventive Services Task Force.

Medicare was not included in this bill, but anyone on Medicare, or Kentuckians who are uninsured, can call the quitline to get access to cessation treatments.

The report also encourages Appalachian communities to launch anti-tobacco communication campaigns that are designed to resonate with their local residents, as some have done with the "tobacco prevention barns" found throughout Appalachia.

It also recommends implementing policies that reduce exposure to secondhand smoke. As of April 1, 35.5% of Kentuckians are protected by smoke-free laws covering all indoor workplaces and public spaces.
Posted by Melissa Patrick at 7:23 PM