Summary of research shows electronic cigarettes are not 95% safer than traditional cigarettes, as one industry 'factoid' claims 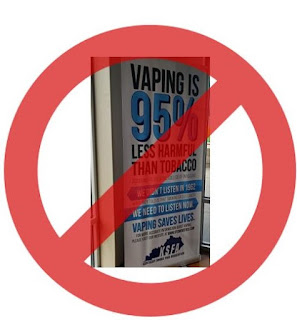 A recent health journal article summarizes a growing body of research that refutes the oft-made claim that electronic cigarettes are 95 percent less harmful than traditional cigarettes. It calls the estimate a "factoid," or an unreliable piece of information that has been repeated so often it becomes accepted as fact.

The peer-reviewed article in the American Journal of Public Health explains that the "95% safer" claim stems from an assertion made in 2013 by a panel of health experts, and not from anything resembling a rigorous scientific study, which must be approved by peers in the field before publication. It says the experts even acknowledged that "a limitation of this study is the lack of hard evidence for the harms of most products."


"What they are basing their claim on is not a peer-reviewed study," said Ben Chandler, president and CEO of the Foundation for a Healthy Kentucky, which lobbies for tobacco-free policies. "Basically, it's based on the opinions of certain people."

The assertion gained traction after it was endorsed and publicized in 2015 by Public Health England and the Royal College of Physicians – and after the electronic-cigarette industry latched on to it, putting "95% safer" claims on billboards, huge signs at points of sale and retail signs throughout stores.

"It is a perfect example of how the industry has used data that is not from sound science to market their product. And that is why this article is important," Ellen Hahn, a University of Kentucky nursing professor and the longtime leader in Kentucky tobacco-prevention efforts, said. "Finally we can say to elected officials and people who are making decisions about programming about how we are going to handle the e-cigarette epidemic, we can finally say, 'Look here, read this. This is saying that we cannot rely on this "95% is safer" anymore.'"

The authors of the article, including University of Louisville Professor Aruni Bhatnager, offer an easy-to-read summary of research that shows the many dangers of electronic cigarettes, including evidence that they are a gateway for youth to use traditional cigarettes.

First, they point out that today's e-cigarettes are 10 to 20 times more powerful than those produced in 2013. This matters because the added power allows the products to produce more aerosol, which exposes users and bystanders to increased levels of nicotine and other toxicants. It also increases the potential for malfunction, like the device exploding.

The authors also note that many more flavors are available than in 2013. These new flavors are generally recognized as safe to consume, but any toxicity they may have to the lungs is unknown, says the report.

One of the most striking changes since the early models, according to the authors, is the addition of "nicotine salts," which allow high levels of nicotine to be inhaled more easily with less irritation than traditional cigarettes. That was pioneered by Juul Labs, using old tobacco-company research.

The article also states that there is "ample evidence, unavailable in 2013, that e-cigarette aerosols contain toxicants and that these aerosols are harmful to living cells;" and that recent evidence shows e-cigarettes are harmful to users, pointing to several studies that show harm to the lungs and heart.

Hahn stressed the importance of the last finding. "We have plenty of research at this point to say that people who use electronic cigarettes and who inhale them secondhand are at risk of heart and lung disease," she said. "People should care about that because heart and lung disease are rampant in Kentucky."

The authors also note that numerous studies have found e-cigarette use increases the chance that youth and young adults will also smoke combustible tobacco products.

While there is a difference in the "toxicant content" between e-cigarette aerosols and cigarette smoke, the authors stress that the aerosol is not harmless and might result in different diseases.

They write that people who use e-cigs and not traditional cigarettes are unlikely to die from lung cancer caused by substances that are found in tobacco smoke but not in e-cigarette aerosols. What diseases they may die of– and if their deaths are hastened by their e-cigarette use – will be part of the much-needed evidence base upon which valid risk estimates can be built," the authors write.

They conclude that "the evidence-lacking estimate derived in 2013 cannot be valid today and should not be relied upon further." The article includes an appendix of research to back up its conclusions.

Chandler stressed the importance of countering this misinformation and said the industry "needs to stop saying things that are not true and not supportable."

"What we've found out in our focus groups and other research is that one of the biggest problems we face is this lack of information amongst young people about the harmful effects of these products," he said. "They start using the products thinking they are safe and the next thing you know, they are addicted."
Posted by Melissa Patrick at 8:02 PM