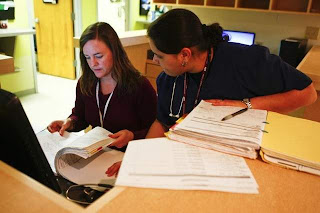 An aging population, a high number of doctors getting ready to retire, and medical students opting to specialize for better pay and hours are all factors contributing to an expected shortage in primary-care doctors in Louisville.

"By 2020, Jefferson County will need 455 new primary-care doctors — almost as many as the number that work in local medical practices now," reports Patrick Howington for The Courier-Journal. (C-J photo by Matt Stone)

"We see a real workforce crisis in the future — in the immediate future," said Bill Wagner, executive director of Family Health Centers, a group of community clinics that serve low-income residents. 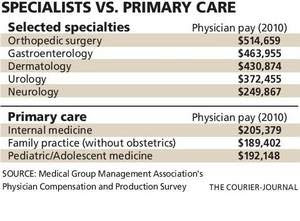 One survey of local physicians found about a third of doctors are 56 or older and are planning to retire within 10 years. Couple that statistic with the fact that the number of American medical-school seniors who entered family-medicine residencies fell from 17 percent in 1997 to 8 percent last year, Association of American Medical Colleges figures show. Part of the reason for the drop is the comparatively low salaries primary care physicians make. On average, they are paid as little as half as much as specialists, such as radiologists and invasive cardiologists.

Though doctor shortages have typically been seen as a rural problem, that's not so anymore. "No matter where you're talking about, we clearly have an aging primary care workforce," because primary care has been "so unpopular," said Dan Varga, chief medical officer of Kentucky's St. Joseph hospitals and a former Louisville internist. (Read more)
Posted by Tara Kaprowy at 11:14 AM