Use of pacifiers could lead to very sick babies, study finds 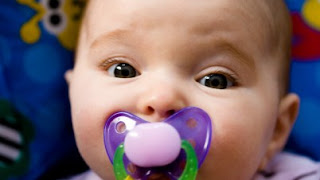 Oklahoma State University researchers report that they have found a wide range of disease-causing bacteria, fungus and mold on pacifiers that young children had been using.

In research presented at the American Society for Clinical Pathology, scientists have shown that pacifiers can also grow a slimy coating of bacterial film that alters the normal bacteria in a baby or toddler's mouth, increasing the likelihood of colic and ear infections. It gets worse, according to study author Tom Glass, a professor of forensic science, pathology and dental medicine: The same types of bacteria found on a common pacifier have been linked to cardiovascular disease, metabolic syndrome, allergies, asthma and autoimmune diseases.

HealthDay reporters Barbara Bronson Gray writes that Glass said the problems associated with pacificers are also applicable to any removable orthodontic appliance like retainers, mouth guards and dentures. Glass said his researchers were particular concerned about their findings when they discovered that "many of the bacteria growing from the used pacifiers were resistant to commonly used antibiotics such as penicillin and methicillin. The development of such resistance to certain antibiotics does not cause the organism to be more infectious than other strains that have no antibiotic resistance, but it can make the infection more difficult to treat." Glass told Gray that he does not recommend that pacifier use. use. "After doing the study, I say why take a risk?" (Read more)
Posted by Amy Wilson at 11:59 AM