When it comes to state policies to discourage smoking, Kentuckians are evenly divided on whether to increase the state's tax on a pack of cigarettes by $1, but support raising the minimum age to purchase tobacco products to 21, according to a recent Kentucky Health Issues Poll. 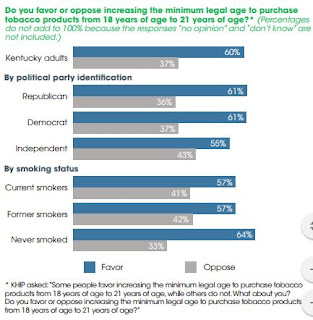 The poll, taken Sept. 17-Oct. 7, found that 60 percent of Kentucky adults favor raising the legal age to buy tobacco from 18 to 21, while 37 percent oppose this change. This support was the same among Republicans and Democrats at 61 percent, and only slightly less popular among independents, at 55 percent. The poll's error margin is plus or minus 2.4 percentage points.

"Raising the minimum legal age to buy tobacco serves as a deterrent to keep teenagers from starting tobacco use," Susan Zepeda, CEO of the Foundation for a Healthy Kentucky, said in a news release. "While KHIP shows mixed opinions about increasing cigarette taxes, the data clearly indicates the majority of Kentucky adults recognize the need to try and keep young people from starting tobacco use by raising the minimum legal age to purchase tobacco products."

Only one state, Hawaii, has increased the minimum legal age for buying tobacco products to 21, but 115 local jurisdictions in nine states have done so, the foundation said.

Sixty-four percent of Kentuckians who had never smoked favored raising the legal age to 21. Among current and former smokers, 57 percent endorsed the change.

But when it comes to raising taxes to discourage smoking, Kentuckians are split.

A slight majority, 51 percent, oppose a policy change that would increase the 60-cent tax on a pack of cigarettes to $1, with 45 percent supporting it. Again, Republicans and Democrats showed equal support, at 50 percent; and 53 percent of independents opposed the idea.

Kentucky is one of 11 states with a cigarette tax of 60 cents or less, the foundation noted. Raising the tax by $1 would bring the tax nearly to the $1.61 overall national average. according to the Campaign for Tobacco-Free Kids.

Kentucky already has a higher cigarette tax than most of tobacco states: Virginia (30 cents), North Carolina (45 cents), South Carolina (57 cents), Georgia (37 cents) and Tennessee (62 cents). The average for these states is 48.5 cents per pack. The average tax in non-tobacco states is $1.76 per pack, says the Campaign for Tobacco-Free Kids.

Not surprisingly, 85 percent of current smokers oppose an increase in the cigarette tax to $1. Supporting the tax are 59 percent of those who have never smoked and 51 percent of former smokers.

Kentucky has the second highest rate of adult smoking in the nation, 26.5 percent. The national average is 18.1 percent, according to the federal Centers for Disease Control and Prevention.

About 18 percent of high-school students smoke traditional cigarettes, and 24 percent use e-cigarettes, Elizabeth Hoagland, youth tobacco-policy specialist with the state health department, said in October on Kentucky Educational Television. She added that 30 percent of youth who experiment with smoking will go on to become daily smokers.


The poll was conducted by the Institute for Policy Research at the University of Cincinnati for the foundation and Interact for Health, formerly the Health Foundation of Greater Cincinnati. It surveyed a random sample of 1,608 Kentucky adults via landlines and cell phones.
Posted by Melissa Patrick at 11:13 PM