In state Trump won in a landslide after pledging Obamacare repeal, fewer than 1 in 5 said they feared losing coverage

Fewer than one in five Kentucky adults who have health insurance were concerned about losing their coverage in the weeks after Gov. Matt Bevin proposed changes to the state's Medicaid program and Donald Trump pledged to repeal the Patient Protection and Affordable Care Act, according to the latest Kentucky Health Issues Poll.

Ninety percent of those polled Sept. 11 through Oct. 19 said they had health insurance. They were asked, "Are you concerned that you may lose your coverage within the next 12 months?" 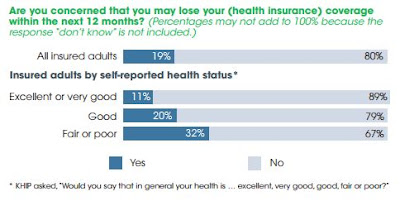 "The vast majority of Kentuckians just weren't worried about having their health insurance coverage taken away, despite the debate about the potential for repealing the ACA in the months preceding the election," said former U.S. Rep. Ben Chandler, president and CEO of the Foundation for a Healthy Kentucky, which co-sponsors the poll. "Kentucky, like the nation, remains deeply divided on the health-care law."

Trump got 62.5 percent of Kentucky's vote. An article by Sarah Kliff and Byrd Pinkerton of Vox could help illustrate why many Kentuckians said they weren't concerned about losing their coverage. They went to Whitley County, which had a 60 percent drop in uninsured people due to the law, but is heavily Republican and gave 82 percent of its votes to Trump.

They report that "many" in Whitley County voted for Trump because they didn't believe he would "repeal a law that had done so much good for them." Those interviewed also expressed anger over increasing premiums and deductibles, fewer plan choices and a narrowing network of providers, though they had a "persistent belief that Trump would fix these problems and make Obamacare work better," with some even saying they hoped the expansion of Medicaid might include more people, "offering more of the working poor a chance at the same coverage the very poor receive."

Republicans are pursuing their promise to repeal Obamacare, with the U.S. Senate and House voting last week for a budget resolution, largely along party lines in each chamber, as the first step. Trump recently promised "insurance for everybody" but also endorsed funding Medicaid through block grants to the states and giving the states more leeway to set its rules. 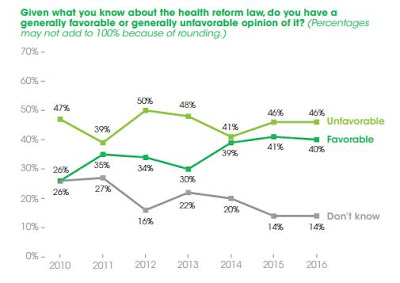 "More than 600,000 Kentuckians have gained health coverage under the ACA, and our own research shows that it has greatly increased the use of important health measures such as cancer and dental screenings, preventive care services and substance use treatment," Chandler said. "Yet nearly half of Kentuckians continue to oppose it."

Under the law, the previous state administration expanded Medicaid to people in households earning up to 138 percent of the federal poverty line. This added about 440,000 Kentuckians, most of them in low-paying jobs that don't offer health insurance. The federal government paid the full cost through 2016, but the state is now paying 5 percent, which will rise in annual steps to the law's limit of 10 percent in 2020 unless the law is changed.

Bevin says Kentucky can't afford to pay the bill and has submitted a plan for a waiver from federal rules, to make "able-bodied adults" pay small monthly premiums depending on income and either work or volunteer to get their benefits, among other changes. It is expected to be approved.

The poll was conducted by the Institute for Policy Research at the University of Cincinnati for the foundation and Interact for Health, a Cincinnati-area health foundation. It surveyed a random sample of 1,580 Kentucky adults via landlines and cellphones.
Posted by Melissa Patrick at 8:46 PM