In few other states are rural and small-town adults as dependent on Medicaid as they are in Kentucky, study shows

Adults in Kentucky's rural areas and small towns are more dependent on Medicaid for their health coverage than their counterparts in almost any other state. That is among the findings of a study by the Georgetown University Center for Children and Families and the health-services research center at the University of North Carolina.

The findings are especially relevant at a time when Congress is debating the future of the Medicaid expansion under the Patient Protection and Affordable Care Act. The bill passed by the House would end the expansion in 2020; Senate Majority Leader Mitch McConnell has proposed a phase-out through 2023. President Trump said in his campaign that he would not cut Medicaid, but he supported the House bill. 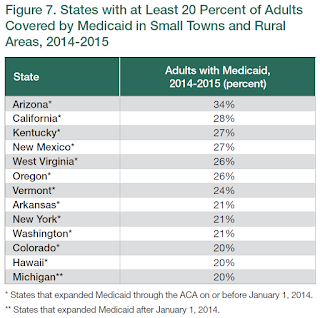 In 2014-15, the period studied, 27 percent of Kentucky adults in small towns and rural areas were on Medicaid, following its expansion to households with incomes up to 138 percent of the federal definition of poverty. The figure was the same in New Mexico, 28 percent in California and 34 percent in Arizona, all states with large Hispanic populations.

California's rural population at the 2010 census was slightly larger than Kentucky's, but its number was a much smaller percentage of its rural and small-town population, only 5 percent; Arizona's was 10 percent; New Mexico's was 23 percent; Kentucky's was 42 percent. From 2008-09 to 2014-15, California and Kentucky had the second largest percentage-point increase in adults in Medicaid, 14 points; Oregon rose 17 points.

The numbers include children in the Children's Health Insurance Program. Kentucky adopted the program many years ago, so it saw only a 1 percent increase in rural and small-town children on Medicaid and a 2 percentage-point drop in uninsured children in those areas.