National study finds Kentucky seniors are among biggest users of ambulances; state has a shortage of paramedics and EMTs

A study aimed at providing a snapshot of how ambulance use varies between states found that Kentuckians on Medicare are among the heaviest users in the nation.

The study, conducted by the Rural and Underserved Health Research Center at the University of Kentucky, looked at Medicare beneficiaries using both ground and air ambulance services, the number of miles they were transported per year and per day, and the number of days of services they used in a year. The researchers said they used Medicare data because the benefits are the same nationwide, making it easier to make regional comparisons.

It found that Kentucky, Alabama, South Carolina, Tennessee and West Virginia were the top five states in ambulance use for all of these measures in 2012-14, with Alaska, Arizona, Colorado, Hawaii, Nevada and Utah at the bottom of the list.

Parsing data by regional census divisions, the study found found that 13 percent of Medicare beneficiaries in the East South Central division (Kentucky, Alabama, Mississippi and Tennessee) used a ground ambulance service and traveled almost 33 miles per year, on average -- the most of any division. The typical usage in the region was two days a year, with an average trip of 16 miles. 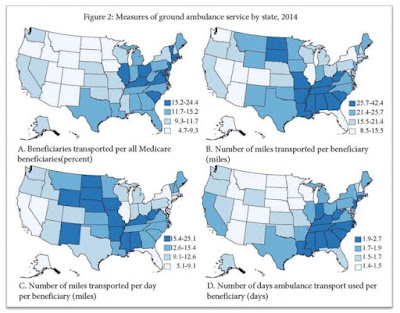 The study found that in 2014, Medicare beneficiaries in New England had the highest ground-ambulance usage and the Mountain division had the lowest. It found those in the Southeast (East South Central and South Atlantic) traveled further per year and per day, and received transportation more often than other areas of the U.S. The West North Central states (Kansas, Missouri, Iowa, Nebraska, Minnesota and the Dakotas) were transported more miles per day per beneficiary, but also traveled fewer days per year.

Air transportation was most prevalent in the West (comprising the Mountain and Pacific divisions), but the report points out that the number of people using air ambulance service was small compared to ground transportation.

The report also includes data from a 2013 Centers for Disease Control and Prevention survey that found patients 65 years and older represented almost 16 percent of emergency-room visits, but represented almost one-third of those arriving to the ER by ambulance. It also found that patients living in the South (38.3 percent) were the most likely to arrive by an ambulance, compared to the West (24.9 percent), Midwest (22 percent) and the Northeast (14.8 percent).

Why does it matter?

The researchers say the study is important because it will help policy makers make better decisions about their ambulance services, which provide a vital service to communities.

"From our study, we believe policymakers and researchers need to consider differences across the regions of the U.S. when evaluating reimbursement and rules about usage," they write. "When looking at changes in the supply of ambulance services in an area, we need to consider the current rate of usage of those services. An area which relies more heavily on these services would react differently to a change in policy than an area with lesser usage."

The report notes that many ambulance services are at risk of scaling back or closing their doors because of finances. For example, they noted that Letcher County has had to reduce its ambulance service funding because of a loss of revenue from the coal severance tax.

Another challenge facing ambulance services in Kentucky is staffing. "We've got more paramedics in the state than we've ever had, but paramedics are doing more than we've ever done." Mike Poynter, the executive director of the state Board of Emergency Medical Services, told Kentucky Health News. "We're not just in the back of an ambulance anymore."

Because paramedics have so many options these days, Poynter said this has put a strain on ambulance services that are in geographic locations that are hard to staff or that can't pay a competitive salary.

For example, he said paramedics are increasingly being hired by emergency rooms, which usually offers higher wages and better benefits; that many of them are going back to nursing school because it pays more; that the influx of air-ambulances, which requires a minimum of four paramedics on board, has taken more than 200 paramedics out the traditional workforce; and that paramedics and EMTs are following the money, often living in one county, but working in another that pays a higher wage.

Kentucky news media have been reporting on these shortages. Lexington's WKYT-TV reported that the administrator of the Owen County EMS estimated a 35 percent paramedic shortage across the state. Louisville's WDRB reported that the shortage of both paramedics and EMTs has caused agencies to compete for workers, and Hardin County, which recently filled all of its positions, increased its salaries by 20 percent for part-time employees in an effort to retain more employees. The Cincinnati Enquirer reported that Northern Kentucky will need 175 new paramedics within five years, adding that the Cincinnati State Technical and Community College is launching a new training class to help meed this need. The State Journal of Frankfort reports that the city's fire-EMS agency has opened a new paramedic training program.

Poynter said one of the profession's greatest challenges is that policymakers and the public don't really know "what we do or how we do it," noting that the training to become a paramedic lasts at least 18 months, and many paramedics have advanced degrees in emergency medical care. "We've got to do better in educating the decision makers on what we actually do and how vital our role is in the community."
Posted by Melissa Patrick at 8:10 PM